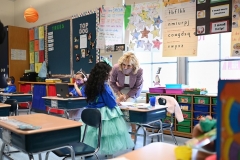 First Lady Jill Biden chats with a student during a tour of Benjamin Franklin Elementary School in Meriden, Connecticut on March 3, 2021. (Photo by MANDEL NGAN/POOL/AFP via Getty Images)

Is it better for a 3-year-old child to spend more time with a government employee or a mother?

President Joe Biden is pushing for a federal program to put preschool children in the hands of the former — theoretically, as a benefit to the latter.

What about summer vacations? Should children have them? Or is it better to keep them in school 12 months a year?

She is Biden's nominee to be deputy secretary of Education.

Democratic Sen. Tim Kaine of Virginia — seeing the COVID-19 pandemic as an opportunity to permanently expand government control over the lives of American children — asked Marten about the prospect of keeping them in school for the summer.

"I would hope that both summer of 2021 and summer of 2022 might be powerful opportunities for us to A. help kids catch up, but we might also learn some things about what the optimal length of the school year should be," said Kaine.

"I mean, we could use it as an experiment, and we might come out of the experiment and decide that, you know, the September-to-May (school year), there's nothing magic about it," Kaine said, "and possibly the best way to help our kids is to have a longer school year, or to readjust the school calendar to minimize learning loss."

"I think that you've cast a vision not just for this summer but the following summer, and that's the kind of forward thinking that I think would be important if I should be confirmed, that we're able to not just have an immediate reaction to what needs to be addressed, but long-term planning," she said.

"So, what we build this summer, I can say from very real experience as a principal of an inner-city school, we were a year-round school, and we had summer programs as well, and I always saw the difference that it made when students had uninterrupted learning," she said.

"And what you can do when you create these kinds of robust summer experiences makes a huge difference," she said.

The post-COVID-19 vision of this Biden administration bureaucrat: Children will go to school this summer, this fall, next winter, next spring and next summer — and that will set the model for the future of America's government schools.

They will be a cage from which no child may escape.

Then there is the question of the age at which a child should be put in this cage.

In his campaign pronouncements, Biden repeatedly vowed to take 3-year-old children out of their homes and put them in school.

One Biden manifesto — "The Biden Plan for Educators, Students, and Our Future" — declared: "President Biden will start investing in our children at birth." (Prior to birth, his administration will invest in what Biden calls "a woman's constitutional right under Roe v. Wade.")

This "investing" in born children will include providing "high-quality, universal pre-kindergarten for all three- and four-year-olds." It will also "expand home visiting."

Home visiting? That is a program, Biden's campaign explained, in "which health and child development specialists make consistent, scheduled visits to help parents through the critical early stage of parenting."

"President Biden will double funding for home visiting so more families benefit from this program every year," says his plan.

Biden also promised to hire more teachers — and pay them more money — to deal with these very young children.

He "will maintain and grow a diverse, talented care and education workforce by providing increased pay and benefits, and access to collective bargaining, training and education, and career ladders," it said.

Would it be good for children to increase government control of their lives?

According to the government itself, children do better academically in Catholic schools than they do in government schools.

Or did they do better because Catholic schools do a better job than government schools at teaching children?

Perhaps the problem is not that students spend too little time in government schools but that they spend any time in them at all.

If the Biden administration truly wanted to give children a better chance to learn, it would encourage school districts to give all parents a voucher equal to the cost of educating a child in the local public schools and let them redeem that voucher at any school they want.