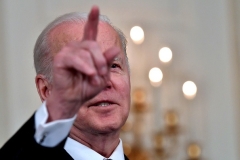 "Show me your budget, and I'll tell you what you value."

When releasing his fiscal 2023 budget proposal on Monday, President Joe Biden said this was something his father had told him.

He then made a claim about a "value" his budget proposal purportedly advances.

That is a lie.

In his speech, Biden elaborated on this lie.

"The previous administration, as you all know, ran up record budget deficits. In fact, the deficit went up every year under my predecessor," he said.

"My administration is turning that around," Biden continued.

But what do the Treasury's official numbers actually tell us about the recent history of federal spending and deficits?

To be sure, these were very high deficits. But they were less than what Biden has planned for post-COVID America.

Now, Biden has proposed a budget that projects continuing annual deficits of more than $1 trillion — in the post-pandemic era.

He will not bring the deficit back down, for example, to the $778,996,000,000 deficit that the federal government ran in fiscal 2018, which was the first full fiscal year President Donald Trump was in office.

As of Monday, the total federal debt was $30,316,415,445,123.62. $6,512,008,255,649.32 of that was in what the Treasury calls "intragovernmental holdings." That consists largely of money the Treasury has borrowed from the Social Security trust fund to pay current expenses that have nothing to do with Social Security.

The other $23,804,407,189,474.30 in federal debt consists of what the Treasury calls "debt held by the public." This is debt that has been financed through the sale of Treasury securities.

In fiscal 2023, according to the estimates Biden published in Table S-10 of his budget proposal, the federal debt held by the public will grow by $1.197 trillion. In each of the nine years after that, it will grow by increasing amounts. In 2032, the last year estimated in Biden's budget, the debt will increase by $1.815 trillion.

"The value is fiscal responsibility," Biden told America when he released this budget.

Anyone who actually looks at Biden's budget proposal, which is posted on the White House website, will know this is not true.

As of March 29, the day after Biden released his proposal, the U.S. population is 332,589,749, according to the Census Bureau. Biden's plan to increase the federal debt held by the public by $15.738 trillion would add approximately $47,320 in debt on behalf of every person now living in this country.

That also would be approximately $250,707 for each of the 157,722,000 people in the United States who, according to the Bureau of Labor Statistics, actually had a job as of February of this year.

According to Harvard University's website, the 2021-22 school year there will cost a student approximately $74,528 for tuition, fees, board and room. At that rate, four full years at Harvard would cost $298,112.

In other words, under Biden's budget projections, in just 10 years the share of the federal debt per the current number of full-time workers in this country will be approximately equivalent to the current cost of a typical American home or a Harvard education.