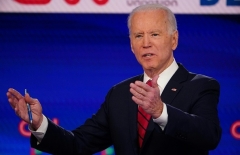 Joe Biden explains his stand on the issues at the March 15, 2020 debate hosted by CNN in Washington, D.C. (Photo by Mandel NGAN/AFP via Getty Images)

They work hard, but they are not rich.

He is a local police officer in a suburb of a midwestern city. His annual salary is $67,620 — exactly the national average for his job, according to the Bureau of Labor Statistics.

She is a registered nurse at the local Catholic hospital. Since their youngest joined his siblings in high school last fall, she has resumed working full time.

Her annual salary is now $77,460 — also exactly the national average for her job.

Where does their money go?

What do they do with the money they make that the government doesn't take?

Well, they pay a mortgage on a modest three-bedroom home and make monthly payments on two cars and two insurance plans — one for their home and one for their two cars.

They also pay tuition at the local Catholic high school that their three kids attend because they want their children in a school that shares their values — and does not let transgender "girls" use the ladies' restroom.

And these are the sort of people that former Vice President Joe Biden and Vermont Sen. Bernie Sanders believe the government should treat as being on the upper end of the income scale.

On March 15, the day Biden had his last debate with Sanders, Biden announced he was adopting Sanders' college-for-all plan.

"Bernie has put forward a plan that would make public colleges and universities free for families whose income is below $125,000," Biden said in a tweet that day. "It's a good idea, and after consideration, I am proud to add it to my platform."

"This legislation would provide at least $41 billion per year to states and tribes to eliminate undergraduate tuition and fees at public colleges and universities and institutions of higher education controlled by tribes," said a fact sheet attached to Sanders' webpage.

So, the hypothetical policeman and nurse, who both earn what the Bureau of Labor Statistics says is the average annual wage for their job, are too wealthy to qualify for the Biden-Sanders college-for-all plan.

But it's not just them.

The data that the Census Bureau has published on the incomes of American households indicates there are certain obvious patterns to earnings in America.

For example, families with a husband and wife who both work tend to earn more than families headed by a person with no spouse.

Married-couple families with at least one child under 18 had a median income of $101,285.

But, according to the Census Bureau's Table F-16, a married-couple family in which both parents worked full time and there was at least one child under 18 had a median income in 2017 of $129,871.

Under the Biden-Sanders college-for-all plan, more than half of those married-couple families with children, in which both spouses were working full time — where the median annual income is $129,871 — would be too "rich" to qualify for free tuition.

Under the Biden-Sanders college-for-all plan, that family where the father is a police officer, the mother is a nurse and the family income is $145,080 per year is too rich to qualify for free tuition at the state university.

Their job in Biden's America — as they work full time to raise and educate their own family— will be to pay the taxes needed to send someone else's kid to college for free.