$1.9 Trillion 'COVID-19' Bill Would Pay for Abortions and NEA-Defined 'Art' 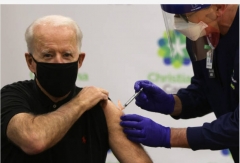 Two years ago, the National Endowment for the Arts awarded a $25,000 grant to a group called Fresh Meat Productions, which is based in House Speaker Nancy Pelosi's San Francisco congressional district.

This taxpayer-funded grant, according to the NEA, went to "support a national tour of Boys in Trouble," which it described as a work "about navigating masculinity and gender in contemporary America."

What exactly was this production that you and other hardworking Americans paid to send on the road?

Fresh Meat Productions has posted a summary on its website. "Boys in Trouble," it says, "is a timely and urgent commentary on contemporary masculinity — these powerful dances place a trans and queer lens onto intersectional questions of embodiment, violence, Black queer love, whiteness, shame and posturing."

"Boys in Trouble," it says, "is a groundbreaking trans and queer examination of American masculinity's deep roots in Trouble."

Last year, the National Endowment for the Arts apparently decided that "Boys in Trouble" deserved an encore. It awarded Fresh Meat Productions with another grant. This new grant, however, was for $30,000, not $25,000.

This federal money, according to the NEA, was to "support the research, creation, development and community-engagement phase" of a "new work" called "The Lost Art of Dreaming."

"The work," says the NEA, "will imagine trans/gender-nonconforming/queer futures, challenging longtime fatalistic American rhetoric and constructs that deny these communities the space to dream about our own futures."

This month, the House Ways and Means Committee approved President Joe Biden's 591-page American Rescue Plan Act of 2021. It would borrow and spend a total of $1.9 trillion — allegedly to combat the COVID-19 pandemic and help Americans find their way through it.

But then there is a paragraph on page 41. It says the bill would provide an additional $135 million in funding to the National Endowment for the Arts. That is on top of the $167.5 million the NEA is already budgeted to receive this year.

Did federally funded artists produce any great masterpieces in this period? Did American taxpayers get their money's worth? Should we now use a bill allegedly designed to fight COVID-19 to pay the NEA an additional $135 million?

But there is something far worse in this $1.9-trillion bill than NEA funding.

On page 95, there is a provision that would authorize the government to pay 85% of the cost that laid-off individuals would otherwise incur (through this September) to continue their health insurance plans through COBRA payments, such named after the Consolidated Omnibus Budget Reconciliation Act. The financial cost of this subsidy would be $7.8 billion, according to the Congressional Budget Office.

On the face of it, that might appear to be an expenditure plainly directed at combating the pandemic.

But another aspect of this provision would not protect human life; it would take it.

Republican Rep. Jackie Walorski of Indiana offered an amendment in the House Ways and Means Committee that would have applied the Hyde Amended to these COBRA subsidies and, thus, prevented this money from being used to fund most abortions.

"The Hyde Amendment has been in place for nearly half a century with bipartisan agreement, saving the lives of more than 2 million innocent babies and protecting Americans' conscience rights," Walorski told her colleagues on the committee.

"My amendment will preserve this important pro-life safeguard by adding longstanding Hyde protections to this subtitle," she said. "This will make clear that a taxpayer-subsidized COBRA plan won't be used to pay for elective abortions. It would also give issuers the chance to instead provide COBRA-eligible plan options that comply with the Hyde Amendment."

Every Republican on the committee voted for this amendment. Every Democrat voted against it. Because the Democrats control the majority, the amendment failed. The bill will not prohibit COBRA subsidies from funding abortions.

Is there a connection between the fact that this $1.9 trillion COVID-19 bill would not only increase funding for an agency that subsidizes bad "art" but also create a new program that would subsidize the taking of unborn lives? Yes.

Great works of art and unborn babies are beautiful for the same reason. They both reflect the profound order God has built into the universe — and they both inspire well-meaning people not to engage in vice, but to embrace virtue.

The same cannot be said of the majority on the House Ways and Means Committee.