NATO Ignores Putin’s Ukraine Warnings at Its Own Peril 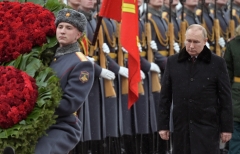 Russian President Vladimir Putin attends a wreath laying ceremony at the Tomb of the Unknown Soldier by the Kremlin wall to mark the Defender of the Fatherland Day in Moscow on Feb. 23. (Photo credit: ALEXEY NIKOLSKY/SPUTNIK/AFP via Getty Images)

In one of the great foreign policy blunders of modern times, U.S. and European leaders repeatedly disregarded Vladimir Putin’s warnings that Russia would never tolerate Ukraine becoming a NATO military asset. Because of resistance from the French and German governments (which had as much to do with Ukraine’s chronic corruption as with concerns about Russia’s reaction), the Alliance delayed offering Kyiv a Membership Action Plan – an essential step toward membership. Nevertheless, at the 2008 summit in Bucharest, NATO’s existing members ostentatiously insisted that "someday" Ukraine would join the Alliance, and they repeated that pledge on numerous occasions thereafter.

Worse, Western officials typically insisted that Russia would have nothing to say about the matter. Jens Stoltenberg, NATO’s Secretary General, was especially blunt and arrogant on that score. He summarily rejected Moscow’s demands in late 2021 that NATO provide binding security guarantees to Russia, including a commitment that Ukraine would never be offered membership, and that NATO military forces would not be deployed in that country. Stoltenberg’s response could not have been more uncompromising: "NATO has an open-door policy. This is enshrined in NATO’s founding treaty…the message today to Russia is that it is for Ukraine as a sovereign nation to decide its own path. And for the 30 NATO allies to decide when Ukraine is ready to become a member."

Western officials implicitly assumed that Russia could be intimidated and eventually compelled to accept Ukraine as part of NATO. They dismissed the Kremlin’s increasingly pointed warnings that efforts to make Kyiv an Alliance asset would cross a red line that violated Russia’s security. Their assumption that Moscow would tamely accept a NATO presence inside Russia’s core security zone proved to be spectacularly wrong, and Ukraine is now paying a very high price in treasure and blood for their miscalculation.

One might hope that NATO leaders would have learned an important lesson from such a costly mistake. However, they are stubbornly ignoring a new set of ominous warnings from Moscow, and this time, the price of such tone-deaf arrogance could be utterly catastrophic. Indeed, it is creating the risk of a nuclear clash between Russia and the United States. In his first speech announcing the "special military operation" in Ukraine, Vladimir Putin warned all outside parties (clearly meaning NATO members) not to interfere. "Anyone who tries to interfere with us...must know that Russia’s response will be immediate and will lead you to such consequences as you have never before experienced in your history." [Emphasis added]

Yet the Biden Administration and other NATO governments boast about how much the Alliance is supporting Ukraine’s military resistance to Russia’s invasion. The centerpiece of the effort to this point has been a surge of weapons shipments to Ukraine, including a focus on heavier and more powerful systems. U.S. Secretary of Defense Lloyd Austin vows that the United States will "move Heaven and Earth" to keep arming Ukraine. New York Times columnist Paul Krugman gushes that the United States has again become the "arsenal of democracy," as it had been in World War II.

The policy constitutes an extremely risky venture that could make the United States a belligerent in a perilous war. Moscow has declared on multiple occasions that convoys carrying weapons from NATO countries into Ukraine are legitimate targets of war. Putin could easily interpret the U.S.-orchestrated cascade of NATO weaponry to support Ukraine’s military resistance as unacceptable interference. The same is true of another Biden Administration measure – sharing intelligence data with Kyiv, even providing Ukrainian forces with real-time targeting information. In one case, that intelligence sharing apparently enabled Ukraine to shoot down a Russian plane with several hundred troops aboard.

As they did during the prewar period, NATO countries are ignoring the warnings coming out of Moscow. Adopting a defiant stance, they instead are boosting their military aid and creating a full-fledged proxy war against Russia. The Kremlin’s warnings are becoming more strident. Putin himself recently admonished NATO members not to test Russia’s patience by continuing to escalate their support for Ukraine. Margarita Simonyan, the editor-in-in chief of both RT and Sputnik and a close associate of the Russian president, stated that Russia might have little choice except to use nuclear weapons if Western policy continues on its current course.

Once again, though, hawks in the foreign policy blob are supremely confident that continued U.S. and NATO belligerence will deter the Kremlin. Michael McFaul, a former U.S. ambassador to Russia, contends blithely that warnings from Putin about using nuclear weapons in response to mounting Western military assistance to Kyiv should be ignored.

"The threat of escalation is cheap talk," McFaul states confidently. "Putin is bluffing."

In an April 27 Wall Street Journal op-ed, former deputy undersecretary of the Navy Seth Cropsey even emphasized that the United States must be prepared to demonstrate that it would "win" a nuclear war against Russia. Other hawks pressure the Biden Administration not to give in to Russia’s "nuclear blackmail." They seem serenely oblivious to the probable consequences if they are wrong. Two analysts even scorned the administration for being excessively fearful of a direct "skirmish" with Russia, as though a clash with a major nuclear power would be the equivalent of a dust-up on a middle school playground. Unfortunately, the policies that Washington is pursuing by pouring arms into Ukraine and creating a proxy war against Russia suggest that administration policymakers may be nearly as clueless as the ultra-hawks outside government to the dangers.

Western officials and members of the foreign policy establishments in the United States and Europe speak openly of helping Ukraine win its war and inflict a humiliating defeat on Russia. What such individuals do not seem to comprehend is that Ukraine is a vital Russian security interest, and the Kremlin will do whatever is necessary – probably even the use of tactical nuclear weapons – to prevent a defeat. The failure to understand just how important Ukraine is to Russia caused Western leaders to disregard Moscow’s warnings over more than a decade against making Kyiv a military ally. For the same reason, they seem to be making an even more dangerous blunder by ignoring Putin’s latest warning about making Ukraine a pawn in a NATO proxy war against Russia. It is imperative to take the new warnings very seriously and back away from a looming war with potentially horrific consequences.

Ted Galen Carpenter is a senior fellow in security studies at the Cato Institute and a contributing editor at the National Interest. He has penned 12 books -- with his latest, "Unreliable Watchdog: The News Media and U.S. Foreign Policy," coming out in July 2022 -- and has authored more than 950 international affairs articles.