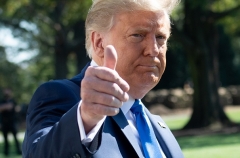 When running against Donald Trump for president, Joe Biden often made the now-ironic charge that any president who has allowed so many deaths from COVID-19 should never be in the White House. Today, there are more deaths from COVID under Biden than under Trump — and that is even with the vaccine.

But it isn't just on health issues that Trump's presidency is looking so much better and competent in hindsight.

Everywhere I go these days, people come up to me and say something like this: "I didn't like some of the things Trump said or the way he acted, but I have to admit I like what he did for the economy."

No one has vindicated Trump's "Make America Great Again" policies more persuasively than Biden. High gas prices, the highest inflation rate in four decades, a plan to double the national debt in 12 years and falling paychecks for workers are waking Americans up to the real broad-based prosperity under Trump.

No one in the progressive movement thought it could possibly work. The Washington Post famously claimed before the 2016 election that "Trump could destroy the world economy." Did that turn out to be true?

Here are just the facts, ma'am. Over his first three years in office before COVID hit, the unemployment rate fell below 4%, which was near the lowest in half a century. The inflation rate fell to 1%, which was even below the target level set from the Federal Reserve. This kept the interest rates on mortgages and many other loans down to the lowest level in modern times.

Poverty rates fell to their lowest levels ever recorded. This was true for women, children, Blacks, whites, Hispanics and Asians. Median household income rose to nearly $68,000, and the $5,000 gain in three years was more than over the second term of George W. Bush and the eight years of Barack Obama.

Here was another remarkable feat: Under Trump, the United States became energy-independent. The month that Trump left office, one year ago, America was importing zero oil from Saudi Arabia, largely because U.S. oil and gas production had surged. Now we have a president who has to beg the Saudis and Iranians to produce more oil. How humiliating.

The bumper stickers are starting to appear everywhere: "Miss Trump Yet?" Not many Americans miss some of his antics. But every day that inflation surges, the border remains in chaos, COVID runs amok and government spending and debt surges to new multitrillion-dollar highs, Trumponomics sounds like a better idea.

Stephen Moore is a senior fellow at FreedomWorks. He is co-author of the book: "Trumponomics: Inside the America First Plan to Revive the American Economy."