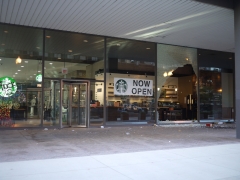 Storefronts along the Loop neighborhood's Wabash Avenue, including that of Starbucks, show damage after a night of rioting against the death of George Floyd, Chicago, Ill., May 31, 2020. (Photo credit: Interim Archives/Getty Images)

Almost exactly a year ago, race riots paralyzed more than a dozen of America's great cities, from New York to Seattle. The smoke hasn't gone away.

As we should have learned from the last episode of urban rioting during the late 1960s, the devastating adverse effects from rage and lawlessness are long-lasting and borne mostly by minorities, immigrant communities, and the poor.

Amazingly, the media had rarely investigated what really happened last summer when criminal gangs seized control of cities under the guise of racial justice. The politicians cynically celebrated the violent protests as "mostly peaceful" and gave cover to the assailants by glorifying them as "social justice warriors."

Thankfully, four reporters at the Chicago Tribune have investigated what really happened in the once great "city that works" and the devastating effects that still are felt. It's harrowing and Pulitzer-worthy material.

Written and reported by Todd Lighty, Gary Marx, Christy Gutowski, and William Lee, we urge a full reading, but here are the lowlights:

In just a few days, there were 15 homicides and 53 shooting victims. More than 2,100 businesses were looted, 71 buildings were set on fire, and looters stole more than 700,000 prescription pills from drug stores.

Businesses suffered more than $165 million in damages, "though the true cost is certainly much higher."

Mayor Lori Lightfoot had no clue what was coming, and her response was indefensibly feeble. She did not want the National Guard, even as the city burned.

The city's inspector general issued a scathing report, which portrays Lightfoot as woefully unprepared, as were other mayors. Downtown businesses were destroyed.

"I thought, 'I'm a black-owned business. They're not going to bother me,'" said Howard Bolling, owner of the Roseland Pharmacy at 11254 S. Michigan Ave.

The riots even forced families at the Ronald McDonald House, where parents' sick children are cared for, to flee for their safety. Protesters used hammers to smash windows and doors.

The Ronald McDonald House is a cancer facility.

Here is what is most infuriating. Throughout that first wave of rioting, looting, arson, and murder, only about 170 rioters were charged with felonies. It should have been 1,000 or more. Why hasn't Chicago law enforcement looked through the videos and tracked down these violent criminals?

Based on the property damage, the homicides, the injuries, and the financial losses to the residents, this insurrection was many times worse than the indefensible actions at the U.S. Capitol by pro-Trump protesters on Jan. 6.

Why is no one paying attention to and amplifying the Tribune story of what happened in Chicago? Why is no one writing similar accounts of the carnage in Minneapolis, Milwaukee, New York, Kenosha, Portland, and Los Angeles? Why isn't the local law enforcement and the FBI hunting down the perpetrators and putting them behind bars? We have video evidence of who they are and what they did. President Joe Biden seems only interested in putting the pro-Trump protesters behind bars.

Who will stop the fires next time and how? The left's response has been to deluge these cities with hundreds of billions of federal dollars. It seems highly unfair to force people in Omaha, Nebr. and Boise, Idaho, to pay for the failure of "progressive" Democratic mayors and blue-state governors to ensure public safety. You broke it; you fix it.

Money won't fix the damage to the civil infrastructure of these low-income neighborhoods that were ransacked. It will take many years and perhaps decades to undo the damage to these communities. These black and Hispanic families deserve justice.