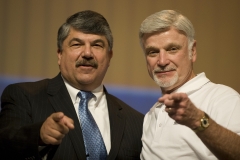 Another pro-President Joe Biden union just told it's rank-and-file members: Sorry, guys, you are all fired.

Last week, the United Mine Workers of America union endorsed Biden's energy policies. Yes, you read that right. The coal-mining union bosses have embraced a bill that outlaws coal mining.

Did anyone bother to actually ask the rank-and-file members what they thought? Can they get their union dues back?

They should. The livelihoods of more than 50,000 coal miners just got sold down the river by their own union bosses.

And for what? So these miners can be given Biden welfare checks, or so mining jobs, which typically pay $75,000 a year, can be replaced with solar panel installation? Ask any miner about that trade, as I have, and they will laugh in your face.

United Mine Workers of America president Benedict Arnold — actually, his name is Cecil Roberts — conceded that his union members "may lose a few more jobs here," but he defended his capitulation to the Biden anti-coal radicals by saying: "We're trying to, first of all, insert ourselves to the extent that we can in this conversation because our people, a lot of coal miners in this country, their families have suffered already some traumatic losses."

So his solution is to make the trauma a whole lot worse thanks to his Neville Chamberlain appeasement to the green energy fanatics of his industry.

Cecil, why not instead DEFEND your industry? It's not a heavy life.

America was built on coal. We are the king of coal. We have 500 years' worth of this energy resource, in states from West Virginia to Wyoming. We have the cleanest coal in the world. It is STILL one of the cheapest and most reliable forms of power production. We still get about twice as much energy from coal as from wind and solar. And even if we were to move toward "renewables," as the Texas power outages this winter should have taught us, coal is essential as a backup power source when wind turbines don't turn and solar panels freeze over.

Don't for a minute believe that shutting down American coal production will save the planet from warming. Nikkei Asia reports that China has "an addiction to coal," and its use of coal is rapidly rising, not falling.

The Chinese are expected to build hundreds of new coal-fired power stations over the next decade. India, Vietnam, Indonesia, and other Asian nations with a combined population that is at least five times that of the U.S. are also banking on coal as a major source of cheap power for decades to come. For every coal plant the U.S. shuts down, the rest of the world builds at least 10 new ones. Gee, that will stop global warming.

There is something wretched about rich, college-educated "humanitarians" pontificating about the sacrifices that must be made to stop global warming, but then they come up with plans that make other people — often who make far less money than they do — suffer all the pain. If climate change meant every college professor, media personality, and million-dollar donor to the Environmental Defense Fund had to lose their livelihoods, I doubt they would be so supportive of this green economic "transformation."

The victims of the new energy policies in Washington are the blue-collar workers whose job losses will continue to stack up. And the worst betrayal of all is that the unions are in on it.