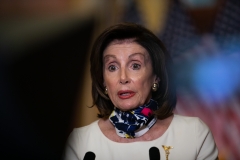 Judging from the fake news media's collective primal scream this weekend, you would think the American economy were lying flat on its back in the intensive care unit. Yes, the economy has been battered in blue states that have masochistically shut down their hometown businesses. But in most red states that are keeping commerce flowing despite a second deadly wave of the virus, unemployment is typically below 6%.

The jobs recovery has been so strong that we have 94.5% of the jobs we had before the worst pandemic in a century, and total wages and salaries are back up to 99% of their previous all-time high.

That hasn't stopped House Speaker Queen Nancy Pelosi from demanding another $1 or $2 trillion stimulus. (Doesn't it seem like Washington is passing out trillions of dollars like they are M&M's?)

We don't need it, and the bailouts to teacher unions, blue state governors and mayors, and airlines would be harmful to the economy. The only way to give money to blue states is to take it from red states.

President Donald Trump's supercharged recovery policy has been the opposite of what the consensus Keynesian economists on Wall Street and in academia have urged for months.

So far, Trump has wisely rejected a second debt bomb package that we were told was essential — and yet 12.4 million more jobs were created without it. University of Chicago economist Casey Mulligan and I estimate Trump saved 3 to 5 million jobs by not agreeing to $600-a-week bonus unemployment benefits. The Congressional Budget Office calculated that "roughly five of six recipients" were getting more from unemployment insurance payments than they would from working.

The fake media is trashing the economy for two reasons. One, they despise Trump and can't believe that he has given us the swiftest recovery in American history. Second, the media is all in on Queen Nancy Pelosi's gambit of passing a $1 trillion blue state bailout. Taxpayer handouts to corporations, mayors, governors, teachers unions, and able-bodied Americans who are not working will capsize Trump's amazing economic recovery, not help it.

A cynic might suspect that this is the real goal.