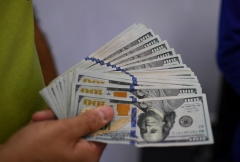 President Joe Biden describes his $3.5 trillion spending scheme as a way to improve the economy and "build back better."

The intention is a good one, but at its core, this plan isn't so much about growing people's wealth as it is redistributing it. The goal is to make the economy not more prosperous but more equitable — fairer.

But nothing the government doles out, including the proverbial "free lunch," is ever really "free." So to pay for the giveaways, the rich will pay more taxes under the Biden plan — a lot more. Tax rates would rise to 50% or more, and death taxes would increase by a record amount. As one liberal commentator recently put it, "It's time to divide the spoils of the American economy."

But our tax code already is highly progressive, and far more than most people have been told.

If you believe the media, you would think there are country clubs full of millionaires and billionaires who pay little or no taxes. Some invest a lot of money in tax accountants and tax avoidance, but that isn't because tax rates are not high enough. If someone has a zero tax liability, raising the tax rate to 50% still means paying 50% of zero, which is zero. Tax avoidance happens because Congress has affixed so many special interest loopholes onto the tax code, like barnacles on the hull of a ship.

But as a group, the top 1% carry a surprisingly hefty portion of the income tax burden on their backs, much more so than in the past. For example, in the 1970s and 1980s, the top 1% in income paid a little less than 20% of all federal income taxes. Amazingly, back then, tax rates were a lot higher than now.

Today, according to IRS data collected by the Urban-Brookings Tax Policy Center, the top 1% pay roughly 40% of income taxes. The Tax Foundation has found that this is close to a record share of taxes paid by the rich, and far higher than in most other nations. Even in the more socialist European nations, the rich don't pay that large a share.

Here's another way to think about it. The wealthiest 1% now pay more in federal income taxes than the bottom 90%. But as rich as Warren Buffett, Oprah Winfrey, Jay-Z, and Bill Gates are, they don't make anywhere near the combined income of the tens of millions of people with incomes below $100,000 a year.

The Biden plan seeks to force the top 1% to pay almost half of all income taxes. But, even if that were possible, is that a good thing for a democracy? Is it good that one out of 100 people bear the burden of half of all the taxes? These are highly successful people for sure, and most are small-business owners and investors. Still, since when in America do we have an explicit policy of punishing success?

The other troubling trend in federal tax policy is that since the coronavirus hit, the share of people who pay no taxes at all has skyrocketed. The Tax Policy Center shows that six of 10 households paid no federal income taxes during pandemic-stricken 2020. That's right. Zero.

Suppose the Biden plan, which dramatically expands tax credits for children and offers other loopholes, is passed. In that case, this percentage could rise to two-thirds of households avoiding income taxes altogether.

It is a dangerous trend. Do we really want nearly 200 million people receiving free government services but not paying any income tax to support the government? If the government becomes essentially free for most people, then these citizens will tend to vote continuously for more free goods and services. It is an outcome for which our forefathers issued warnings. They worried that if voters come to believe they can vote for spending policies that line their own pockets and make other people pay, our democracy will perish.

The temptation to plunder the wealth of the rich legally is called "the tyranny of the majority." It is why every worker and voter should have skin in the game in how our government spends money. One way to ensure this is to have a tax system that requires everyone to contribute, even if it is only a few hundred dollars of taxes a year.

A simple flat tax rate of 19% without all the loopholes would force almost everyone to pay some tax each year. Moreover, it would preclude the millionaire and billionaire crowd from sheltering the bulk of their income in loopholes and exotic deductions.

The Democrats love to talk about how "we are all in this together," and they are right. This is why we must not tolerate an income tax system with more than half of the public paying nothing. If only the rich pay the taxes, then a common lesson of history is that there are fewer and fewer rich people to soak over time.

Stephen Moore is a senior fellow at FreedomWorks. He is the co-founder of the Committee to Unleash Prosperity.