Stephen Moore: The End of the Climate Change Legend 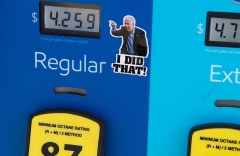 A gas pump displays current fuel prices, along with a sticker of Joe Biden, at a gas station in Arlington, Va. (Photo credit: SAUL LOEB/AFP via Getty Images)

For many years now, there has been a spirited debate about whether climate change is science, religion, or even perhaps a secret route to socialism. That question remains unanswered, but we've now discovered with certainty that climate change is a political albatross around the neck of the Democratic Party.

The Left's spiritual devotion to climate change has been speeding the Democrats over a political cliff with likely unprecedented losses this November. The zero fossil fuels suicide pact was always an economic and political loser. More than 70% of all the energy we produce and consume in America derives from oil, gas, and coal. President Joe Biden's war on these fuel sources was sure to cause severe shortages and $5 a gallon gasoline at the pump. Didn't Democrats learn their lesson in 1980 when Ronald Reagan won a landslide election against Jimmy Carter that surging inflation and gas prices is a surefire way to infuriate voters?

While Biden keeps saying he is doing "everything I can to lower gas prices," he's speaking out of both sides of his mouth — because if your goal is to get people to stop using something, raising its price is a pretty good way to accomplish that. If prices go to $10 or $15 a gallon, you can clear the highways of trucks and cars altogether, and what a wonderful world it will be.

Democrats were so enamored with their Green New Deal delusion that they failed to understand that most people aren't as hyper-obsessed with climate change as they are. A new poll sponsored by my group, Committee to Unleash Prosperity, found that people are much more concerned about inflation and high gas prices than climate change. Moreover, the poll found that respondents' average amount they would be willing to pay for the climate change agenda was $55 a year. Sorry, that's the extra cost we are already spending with two fill-ups at the gas station.

Then there is the increasingly unavoidable reality that the green energy sources they fantasize about are decades away from being technologically feasible to replace old-fashioned oil, gas, and coal. Even the Energy Department predicts that even with the trend toward renewable energy, by 2035, we will still be heavily reliant on oil, gas, and coal for electricity production, home heating, and transportation fuels.

Elon Musk, the leading champion of electric cars, reminded Biden in a recent tweet that in the real world rather than in la-la land, we are going to need oil and gas for many years to come. Today 3% of cars on the road are electric and 95% use gas or diesel.

This brings us to yet another fatal flaw of the climate change movement. The Biden Administration and its radical green allies can't explain why getting our energy from Saudi Arabia, Iran, and Russia makes more sense than Texas, Oklahoma, and Alaska.

This strategy is especially pinheaded because the war on oil, gas, and coal production is a big loser for the environment and increases global greenhouse gas emissions. That is because America has the strictest environmental standards. Shifting oil and gas production to Russia or Iran and shifting coal production to China and India is causing far more air pollution and greenhouse gas emissions. Chinese President Xi Jinping is busy trying to take over the world economy and the last thing he or the ruling class in Beijing cares about is climate change.

Finally, Democrats should have learned from the green energy catastrophe of Western Europe. A decade ago, the French, Germans, Italians, and others in the European Union moved to a renewable energy future. They slashed much of their oil, gas, and coal production, shut down nuclear plants (why?) and subsidized the building of wind turbines and solar panels. It nearly bankrupted Germany as energy prices soared and factories left Europe for America and Asia. A decade later, France is back to building nuclear plants, and Germany is burning more coal than ever before and importing natural gas from Russia. Europe recently redefined natural gas and nuclear power as "clean energy."

Going green wrecked their economies and submerged these countries deeper into the red. Unfortunately, Americans weren't paying any attention to that failed experiment. So now Biden is repeating it. The result is likely to be the same. The Democrats' radical climate change agenda isn't greening the planet and it is bankrupting our country. Voters know exactly whom to blame.