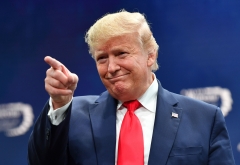 Almost no one expected this. The Federal Reserve Board, the Congressional Budget Office, and private Blue Chip forecasters declared this time last year that it wouldn't be until at least 2022 that the economy was at full force. The economy has spurted at twice the pace the professional forecasters expected. What a shock: Former President Donald Trump proved the "experts" wrong again.

The recovery from COVID-19 is all the more impressive given the economic malaise in Europe and Canada, which foolishly keep closing down their businesses, schools, and stores.

Since June, our economy has grown by more than one-third, while Euroland has recorded two straight negative quarters and is in a dreaded double-dip recession. Meanwhile, as Laffer Associates points out, Europe's unemployment rate is 8.2%, compared with 6.2% here. Our northern neighbors in Canada are at 8.4% joblessness.

So, what did America do right under Trump, and why are we doing so much better than everyone else in the world?

First, America is a can-do country with the most resilient business owners in the world. They managed to soldier through this crisis even as their revenue flows tanked. Add to that the dedicated workers who kept our economy trudging forward during the depths of the pandemic. They are heroes, too, in contrast to the folks who huddled on their couches watching Netflix inside their homes. So many of the men and women who have kept our hospitals, stores, delivery trucks, factories, nursing homes, and airports open have been immigrants. Thank you.

Second, thanks to great governors such as Ron DeSantis of Florida and Kristi Noem of South Dakota, red-state America minimally closed down, and only for a short period. Red states stayed open, cut their unemployment rates to less than 5%, and carried the U.S. economy on their backs, while New York, Illinois, and California locked down and flatlined. These blue states responded more like France.

Again, Trump made a brilliant decision to let the states take the lead. Is there any doubt that if President Joe Biden had been in charge this time last year, he would have ordered a catastrophic national lockdown of our economy and right now we would look more like Europe?

Third, Europe has bungled vaccinations. Trump's policies developed the vaccine one year ahead of schedule, and Biden has done a fine job getting the vaccines distributed. Europe is way behind and now wants to violate the patent protections of the U.S. drug companies to give the vaccines away at discounted prices. This will only delay the introductions of future vaccines.

Alas, The New York Times, while acknowledging America's economic supremacy and the success of Trump's Operation Warp Speed, says the "lesson" of the rapid comeback is that "it pays to unleash enormous amounts of public money in the face of a livelihood-destroying health crisis."

Wrong. The enduring lesson of America's supersized comeback is that it pays to keep your economy functional and open for business so that livelihoods aren't destroyed in the first place.