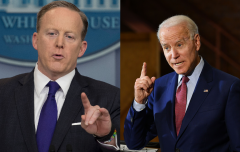 According to some reports, Joe Biden appears to be thinking of his place in history—and that’s why he seems hell-bent on accomplishing big things in a big hurry. Mike Allen of Axios, who broke the story about Biden’s secret meeting, called it a “discussion of how big is too big—and how fast is too fast—to jam through once-in-a-lifetime historic changes to America.” Allen also called the secret meeting a “for-the-history-books marker of the think-big, go-big mentality that pervades his West Wing.”

The historians reportedly told Biden exactly what he wanted to hear: Forget bipartisanship and playing by the rules. Now is the time to bulldoze anything that stands in your way, including such bipartisan niceties as the filibuster. Joe Biden, who ran for president as a bipartisan healer and a uniter, has unmasked himself as a sharply partisan, hard-left strongman president. Right now, his party has total control of the Congress—which could end with the midterm elections of 2022. So, during this two-year window of opportunity, he is ready to shove the levers of government as far to the left as they will go.

And the leftist historians agreed: Go big, and do it now. They confirmed Joe Biden’s worst instincts, urging him to spend big, grow the size of government, expand the power of government, and become another FDR. As Axios observed, Joe Biden “loves the growing narrative that he’s bolder and bigger-thinking than President Obama.”

In that meeting, Michael Beschloss filled Biden’s ears with the classic progressive myth that FDR saved the nation from chaos and economic despair with his big-spending New Deal programs. So Joe Biden is determined to ram through Congress what Axios calls “a $5 trillion-plus overhaul of America, and vast changes to voting, immigration and inequality.” If achieving an FDR-sized legacy means wrecking the rules and traditions of the U.S. Senate, so be it. Joe Biden will pass his agenda without bipartisan compromise, without Republican votes, and without looking back.

Sean Spicer served as the 28th White House press secretary and authored the bestselling book "The Briefing." Spicer is the host of Spicer & Co. on Newsmax TV and the president of RigWil, LLC, a strategic consulting firm. He also serves as a partner in Point1, a political mail firm. His book "RADICAL NATION: Joe Biden and Kamala Harris's Dangerous Plan for America," debuts Oct. 26.