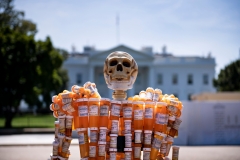 Pill Man, a skeleton made from Frank Huntley's oxycontin and methadone prescription bottles, is seen on Pennsylvania Avenue in front of the White House. (Photo credit: BRENDAN SMIALOWSKI/AFP via Getty Images)

The crisis at the southwest border continues to spiral out of control with U.S. Customs and Border Protection recently announcing a record 212,672 migrant encounters in July.

The over 1.3 million encounters thus far in fiscal year 2021 is a stark reminder that the free-for-all along the border continues to rage unabated.

Much attention has been paid to the humanitarian crisis that this situation has created, particularly along the border itself. But the failure to adequately secure the border also reaches deep into the interior of the United States.

Specifically, transnational criminal organizations have exploited the chaos along the border and allowed portions of it to become a superhighway for various contraband and illicit drugs to pour into the nation.

These cartels have quickly taken advantage of our overwhelmed border patrol. Our border patrol has performed valiantly in the face of an unprecedented surge in irregular migration, but their resources are being stretched far too thin.

The U.S. Customs and Border Protection’s resources are being used to address the migrant crisis, leaving critical vulnerabilities elsewhere along the border.

The result has been skyrocketing numbers of illicit drug seizures along the border, including cocaine, heroin, and the exceedingly dangerous synthetic opioid fentanyl.

NBC News recently reported that federal agents in the El Paso sector have seen a 4,000% increase in fentanyl seizures over the past three years. Federal agents seized just one pound in between ports of entry in all of 2018; that number surged to 41 pounds so far in fiscal year 2021 alone.

Fentanyl is a particularly dangerous drug. As little as 2 milligrams can produce a fatal dose. It is increasingly being incorporated into other illicit drugs, providing cartels a cheap and potent means to increase drug production and financial gain.

Tragically, incorporating fentanyl into other illicit drugs has also fueled an increase in overdose deaths. Unsuspecting users are often ingesting a fatal dose of fentanyl along with whatever other drug they were intending to consume.

The opioid crisis has affected hundreds of thousands of Americans in recent years, with tens of thousands dying every year due to overdose. While earlier attention was paid to the role of prescription opioids within the context of the crisis, the rise of illicit fentanyl and its nefarious introduction into other illegal drugs—including methamphetamine, cocaine, counterfeit pills—has emerged as the true driver of this crisis.

In recent years, illicit fentanyl and/or its precursors have increasingly been smuggled into the U.S. from China, most often via Mexico and ultimately the southwest border. Even more recently, transnational criminal organizations in Mexico have begun producing fentanyl themselves and smuggling it directly into the United States.

This has resulted in local communities—of all sizes and within all 50 states—struggling to provide outreach and services to those afflicted with addiction.

A recent $26 billion settlement agreement between state attorneys general and drugmaker Johnson & Johnson, as well as three major U.S. drug distributors, should provide participating states and localities an influx of much-needed financial resources to address the crisis at the local level. But the scourge of opioid abuse will not recede until the crisis at the southwest border is properly addressed.

The Biden administration must take seriously its obligation to safeguard the national security interests of the American people. This includes providing adequate resources to federal law enforcement personnel tasked with drug interdiction along the southwest border.

Sadly, until this occurs, we will likely continue to experience the tragic fallout of this pernicious crisis.