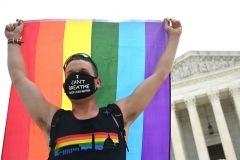 A man waves a rainbow flag in front of the U.S. Supreme Court. (Photo credit: JIM WATSON/AFP via Getty Images)

In a heartbreaking move for conservative court watchers, on Monday the Supreme Court denied a petition to review the case of Gavin Grimm v. Gloucester County School Board—an appeal from the 4th U.S. Circuit Court of Appeals over a biological girl’s access to the boy’s bathroom in one Virginia school district.

In so doing, it hands a victory to the former student, Gavin Grimm, establishes a bad precedent on the ability of students in federally funded schools to use the bathroom of their choosing, and misses a chance to clarify Title IX.

The denial was a bit of déjà vu for the Supreme Court. Grimm’s campaign for bathroom access began in 2015. After a win at the 4th Circuit Court of Appeals, the justices in 2017 remanded the same student’s case to the 4th Circuit to interpret Title IX in light of the Trump administration’s withdrawal of a federal guidance that had previously permitted mixed-sex bathroom use in schools receiving federal funds.

In that previous appeal, the lower court had relied on an interpretation of federal law by the Obama Administration’s Education Department, which determined that transgender students could use the bathroom of their choice. It had not, however, reached a substantive conclusion on whether that interpretation was correct.

The Supreme Court’s denial of review cements a substantive win for Grimm. The 4th Circuit held in 2020 that Title IX and the equal protection clause required the school district to allow Grimm, a biological girl, to use the boy’s bathroom. Even the school’s provision of a separate, sex-neutral bathroom for Grimm was considered insufficient to protect Grimm’s legal interests.

Two of the court’s arch conservatives, Justices Clarence Thomas and Samuel Alito, dissented and would have granted review. Perhaps they rightly recognized a lost opportunity to bring clarity to Title IX’s current patchwork of competing schemes and interpretive guidance.

States, the Biden Administration, individual school districts, and the courts have all taken varying approaches in response to President Joe Biden’s executive order of Jan. 20, which directs all federal agencies to include sexual orientation and gender identity within the interpretation and application of the anti-discrimination laws enforced by their respective agencies.

This may not be the only time the Supreme Court has a chance to review what is required by Title IX’s provisions, though, as another Title IX lawsuit challenging sex-segregated athletics is currently pending in the 2nd U.S. Circuit Court of Appeals, after being dismissed by a federal trial judge who made clear his political preferences on the transgender issue.

In addition, a school district’s petition for the 11th U.S. Circuit Court of Appeals to rehear yet another school bathroom case is currently pending.

Should either the 2nd or 11th circuits take a textualist approach to Title IX, the conflicting interpretations would set up another opportunity for the Supreme Court to clarify whether its glib expansion last term of “sex” in anti-discrimination employment law in Bostock v. Clayton County to include sexual orientation and gender identity applies to other anti-discrimination statutes.

Indeed, in the Bostock v. Clayton County opinion itself, Justice Neil Gorsuch, writing for the majority, clearly stated that the ruling on Title VII’s expansion of “sex discrimination” to include sexual orientation and transgender status should not be construed as automatically applying to other federal civil rights laws:

The employers worry that our decision will sweep beyond Title VII to other federal or state laws that prohibit sex discrimination. And, under Title VII itself, they say sex-segregated bathrooms, locker rooms, and dress codes will prove unsustainable after our decision today.

But none of these other laws are before us; we have not had the benefit of adversarial testing about the meaning of their terms, and we do not prejudge any such question today.

Under Title VII, too, we do not purport to address bathrooms, locker rooms, or anything else of the kind. The only question before us is whether an employer who fires someone simply for being homosexual or transgender has discharged or otherwise discriminated against that individual "because of such individual’s sex."

The recent guidance issued by the Department of Education’s Office for Civil Rights makes clear that at least until a change in administration or the Supreme Court’s review of the issue, Title IX’s prohibition on sex discrimination in educational institutions that receive federal funding will be interpreted to mean discrimination on the basis of sexual orientation and gender identity, too.

However, both the president’s January executive order and the Department of Education’s recent guidance remain silent on potential enforcement actions the agency might take against institutions that don’t comply. Schools should anticipate future guidance from the Education Department on how to comply with its new Title IX interpretation—and what the consequences of noncompliance might be.

While religious schools will continue to enjoy a religious exemption granted to them by the implementing regulations of Title IX, that, too is currently being challenged in court, with a class of students at religious institutions claiming that Title IX’s religious exemption is unconstitutional as a violation of their right to equal protection.

Sarah Parshall Perry is a legal fellow at The Heritage Foundation's Edwin Meese III Center for Legal and Judicial Studies.