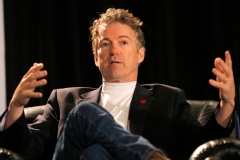 Even by Washington standards, the Biden Administration’s recent request for $33 billion for military aid to Ukraine was shocking. Surely a coalition of antiwar progressives and budget-hawk Republicans would oppose the dangerous and expensive involvement of the U.S. in the Russia/Ukraine conflict?

No! Not only did Congress not object: they added nearly seven billion MORE dollars to the package!

In the end, not a single House Democrat voted against further U.S. involvement in the war, and just 57 Republicans said “no” to funding yet another undeclared war.

On the Senate side, Majority Leader Chuck Schumer (D-NY) and Minority Leader Mitch McConnell (R-KY) both demanded immediate passage of the huge giveaway to Ukraine. That’s Washington’s bipartisanship for you.

Then the junior senator from Kentucky came to the Senate Floor and did the unthinkable in Washington: he delayed the vote.

“My oath of office is to the national security of the United States of America,” Sen. Rand Paul said. “We cannot save Ukraine by dooming the U.S. economy.” He went on to point out that the U.S. has spent nearly as much on Ukraine’s military as the entire military budget of Russia and that the U.S. government has sent more military money to Ukraine than it spent in the entire first year of the U.S. war in Afghanistan.

Sen. Paul put the package into perspective: this massive giveaway to Ukraine equals nearly the entire yearly budget of the U.S. State Department and is larger than the budget of the Department of Homeland Security!

Schumer was furious with Paul, accusing him of “preventing swift passage of Ukraine aid because he wants to add at the last minute his own changes directly into the bill.”

What was he trying to add to the bill? In his own words, “All I requested is an amendment to be included in the final bill that allows for the Inspector General to oversee how funds are spent.”

He wanted at least a bit of oversight on the nearly $50 billion in total that Washington has sent to what Transparency International deems one of the most corrupt countries on earth. Is that really too much to ask?

For Washington, the answer is “yes.” The Special Inspector General for Afghanistan Reconstruction (SIGAR) was an endless thorn in Washington’s side, because he actually did his job and reported on the billions of dollars that were stolen in Afghanistan.

In its final report on the 20-year Afghanistan war, SIGAR reviewed approximately $63 billion of the total $134 billion appropriated to Afghanistan and found that nearly $19 billion of the amount was lost to waste, fraud, and abuse. Nearly one-third of the funds they reviewed were outright wasted or stolen by corrupt Afghan officials. Does anyone think it would be any different in Ukraine?

The temporary pause is important. It gives Americans a little time to let their senators know that they do not support this ridiculous and wasteful giveaway to Ukraine. Inflation is ripping through the country. Gas prices are through the roof. Our infrastructure is crumbling. The dollar is teetering. And we’re giving money away?

The vote appears set for Wednesday. Time to let your senators know what you think about it!