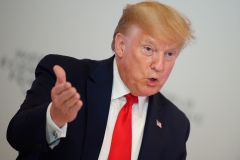 The Senate trial for now twice-impeached former President Donald Trump is set to begin this week, with little doubt over the outcome. A procedural vote in the Senate on the constitutionality of “removing from office” someone who is not in office revealed that nowhere near enough Republicans were willing to join their Democrat counterparts in voting to convict.

Supreme Court Chief Justice John Roberts, who is required by the Constitution to preside, has by refusing to participate made it clear that he does not consider the upcoming action in the Senate to be a legitimate impeachment trial.

So if it is not a legitimate trial, what is it, then? Judging from the House impeachment resolution, it looks more like a banana republic “show trial” than a careful case detailing Trump’s “high crimes and misdemeanors.”

Trump was impeached by the Democrat-controlled U.S. House for “incitement of insurrection” over the Jan. 6 melee at the U.S. Capitol. Telling his supporters they must fight or they’re “not going to have a country anymore” was cited in the impeachment resolution as evidence that Trump “gravely endangered the security of the United States and its institutions of Government” and has “demonstrated that he will remain a threat to national security, democracy, and the Constitution if allowed to remain in office.”

Trump also told them to march to the Capitol “peacefully and patriotically” to encourage Congress to consider his claims of election fraud, but Democrats in the House say that he didn’t really mean it.

Why the snap impeachment? Why not, as constitutional law professor Jonathan Turley has written, hold hearings and call witnesses to explore whether the former president actually had insurrection on his mind? Did he call off or delay the National Guard troops from protecting the Capitol, for example?

Or was he simply using heated political rhetoric that his accusers in Congress have also used plenty of times?

Weeks of hearings in the House with dozens of witnesses could have helped make the case for the Senate that Trump was guilty of inciting insurrection. Such hearings could have turned the tide against Trump in the Senate, where he is certainly not universally supported within his own party.

But the House had no interest in such hearings. They wanted a snap impeachment. They wanted no witnesses. They wanted to benefit from the universal mainstream media narrative that the mob who entered the Capitol building was not just unruly Americans angry over what they believed was a rigged election, but was actually trying to overthrow the government to keep Trump in power.

The House Democrats knew that the “insurrection” narrative would not stand the test of time – anyone familiar with “color revolutions” or coups overseas would easily recognize that this was not one. So they rushed through the impeachment not because they wanted to remove him from an office he no longer occupied, but because they wanted to bar him from ever running for office again.

It does raise the question: what are they afraid of? They called their impeachment a victory for democracy, but isn’t preventing Trump from running again a subversion of democracy?

Trump would do well to ignore the Senate proceedings. There is no reason to participate in a show trial. The media has reported that he intends to focus on the “stolen” election in his defense before the Senate. That would be counterproductive. The right question to ask is, “what if they held a show trial and nobody came?"