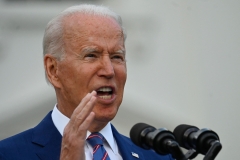 That sure didn’t go as planned. This may have been the most disastrous – and dangerous – presidential overseas trip ever.

But at every stop, President Biden seemed to undermine the narrative his own administration had carefully crafted. First up, warning that Russia might use chemical weapons in Ukraine, Biden promised it would "trigger a response in kind," meaning the U.S. would use chemical weapons as well. That would be a serious war crime.

National Security Advisor Sullivan had to be brought to explain that the U.S. has "no intention" of using chemical weapons.

Later, speaking to the 82nd Airborne in Poland, President Biden told them that U.S. troops would soon be in Ukraine. He said to the troops, “you’re going to see — you’re going to see women, young people standing — standing the middle of — in front of a damn tank, just saying, ‘I’m not leaving. I’m holding my ground.’”

A White House spokesman had to clarify that, “the president has been clear we are not sending U.S. troops to Ukraine and there is no change in that position.”

Clear? Well, not really. He had just said the opposite to our own troops!

Then, at the end of Biden’s final speech in Poland, the president inadvertently told the truth: the U.S. involvement in Ukraine is all about regime change for Russia. Speaking of Russian President Putin, he told the audience, near the border of Ukraine, "for God‘s sake, this man cannot remain in power."

The president’s disaster control team immediately mobilized in the person of Secretary of State Antony Blinken, who offered this pained interpretation of Biden’s clear statement, "I think the president, the White House, made the point last night that, quite simply, President Putin cannot be empowered to wage war or engage in aggression against Ukraine or anyone else."

No, that’s not what he said. The president has a leading Constitutional role in the formation of U.S. foreign policy, and he said in a public speech that regime change in Russia is U.S. policy. Any attempt by his staffers to try to explain it away looks terrible: either the president has no idea what he’s saying so we should not take seriously what is essentially a declaration of war on Russia, or the president took the opportunity on the border with Ukraine to essentially declare war on Russia.

Presidents Reagan, Ford, and Bush Jr. were all known for their gaffes. Some were funny and some were serious. But none of them declared war on a nuclear-armed adversary in that adversary’s own backyard and then afterward had to send out staff to explain that the president didn’t mean what he just said.

Interestingly, Biden saved his most hawkish and bombastic statements for this final speech in Poland, at which none of the more cautious NATO partners like Germany and France were present. So much for “unity” being the prime purpose of the trip.

There is a real problem in the Biden Administration and the sooner we face it the better.