Isn't it Time For Adam Schiff to be Expelled From Congress? 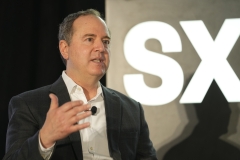 Adam Schiff (Getty Images)
With each new release of the “Twitter Files” we learn more and more about the deep corruption in Washington. We sensed during Covid that something was really wrong – for example the bizarre denial of natural immunity. But thanks to Elon Musk’s decision to open the books, our worst fears have been proven true. Each new release seems to show something even more criminal inside America’s rotten ruling class.

In the latest release, thanks to the excellent reporting of independent journalist Matt Taibbi, we see outgoing Chair of the House Intelligence Committee, Rep. Adam Schiff (D-CA), continuously pressuring Twitter to validate his fantasies of “Russian bots” manipulating US politics.

The short version of what Taibbi reported comes from around the time then-Chairman of the House Intelligence Committee Rep. Devin Nunes (R-CA) was about to release his Committee’s findings about the FBI misuse of the FISA Court to spy on the Trump presidential campaign. The FBI, it turns out, relied exclusively on the widely-discredited “Steele Dossier” – paid by the Hillary Clinton campaign – as justification to spy on the Trump campaign.

When pressure grew to release the Nunes findings, Twitter exploded with users demanding that Congress “release the memo.” That’s where then-ranking Member Schiff and his staff began relentlessly pressuring Twitter to show that the accounts demanding the release of the memo were actually Russian agents, out to help their supposed favorite, Donald Trump. Schiff was not alone. Fellow “Russiagate” hoaxers like Sen. Feinstein (D-CA) and Sen. Richard Blumenthal (D-CT) also pressured Twitter to find Russians behind the demand to release Nunes’ findings.

Over and over, Twitter – which was hardly sympathetic to Trump – told Schiff and his colleagues there was simply no evidence of Russian involvement. As much as some Twitter employees may have liked to report the opposite, to their credit they refused to participate in the scam.

Even after Twitter had informed Schiff and his fellow hoaxers that there was no Russian involvement, Sen. Blumenthal released a statement he knew was not true: “We find it reprehensible that Russian agents have so eagerly manipulated innocent Americans.” Again, this was right after he had been informed by Twitter employees - who were by-and-large strongly opposed to Trump - that there was just no evidence to back up such a statement.
We are moving closer and closer to a nuclear showdown with Russia over Ukraine. For political gain the Democrats – and plenty of Republicans – have been pushing the “Russiagate” hoax and in so doing have fertilized the ground for the obsessive Russia hatred prevalent in the US today.

I do not believe it is an exaggeration to say that if US/Russia relations had not been poisoned by the lie of “Russiagate” for pure political gain, we would not be anywhere near our current state of near-direct conflict with the largest nuclear power on earth, Russia.

It is shocking that Schiff and his "Russiagate" allies would potentially sacrifice millions of dead Americans to defeat Trump and other political enemies.

Let’s not forget: Rep. Jim Trafficant was expelled from Congress for asking his staffers to wash his boat. Shouldn’t there be at least equal punishment for Senators and Members who are lying us into World War III?
Courtesy of the Ron Paul Institute for Peace and Prosperity.
donate
mrc merch