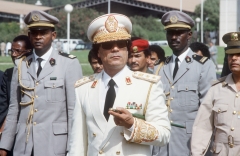 The natural law of any society is either tradition (custom) or religion. Any other attempt to draft law for any society, outside these two sources, is invalid and illogical.

This isn’t a string of words you’d expect to come out of a ruthless socialist dictator’s mouth.

And yet it is not the only startling quote from long-time Libyan head Muammar Gaddafi uncovered and analyzed by journalist Charlie Nash in his new book, “Gaddafi, Existentialist.”

The work paints a nuanced portrait of a man whose Islamic faith led him to espouse socially conservative principles like the significance of tradition and family ties while simultaneously perpetrating internationally admonished human rights abuses.

Although Nash derives the aforementioned quote from Gaddafi’s “Green Book,” his investigation of the four-decade-plus ruler’s ideology is at its most lucid when assessing Gaddafi’s works of fiction from the relatively obscure “Escape to Hell and Other Stories.”

In two passages from this book, Gaddafi contrasts rural and urban life, extolling the virtues of the former while heaping derision on the latter.

The city was not created for luxury, happiness, or pleasure. In reality, the city is a scavenging multitude in which people find themselves out of necessity. People have not come to live in the city for the sake of enjoyment, but to make a living....

The city is a cemetery for social ties….And by the nature of city life, one’s purpose becomes self-interest and opportunism, and one’s norm of behavior becomes hypocrisy.

“Villages and oases are not merely geographical places of residence; they represent an ethic that is at odds with what Gaddafi sees as the most important types of behavior in the city: extreme selfishness, runaway consumption, and ignoring others,” writes Nash.

Nash elaborates to reveal that, according to Gaddafi, city and country are not only antithetical, but possess an outright parasitic relationship, with the city requiring the output of the country to subsist but dissuading effort and patience-based production, ultimately “sucking the blood and killing – like a concrete vampire – everything it touches,” in Nash’s words.

American readers will find this section of the book fascinating and see that the city-country dichotomy that animated much of the populist, anti-elite movement behind the Tea Party and Trump’s ascendance to the presidency is not exclusively a Western phenomenon.

But Nash takes care to draw distinctions between Gaddafi and other existentialists, arguing that the Libyan leader did not extrapolate a broadly nihilistic view of society from these observations, instead exclusively applying these negative qualities to city life.

Nash also makes sure not to rely on his own literary analysis, incorporating views held by professors, authors, and other public figures to further elucidate Gaddafi’s ideology.

It is a line from Belgian professor Francis Dessart that perhaps best characterizes the ideological enigma that Nash has uncovered for us:

If you search for [Gaddafi] on the right you will find him on the left, since he preaches in many ways a renovation with the air of revolution. But if you look for him on the left you risk finding him on the right, because this sincere mystic is tied to more than one traditional value.

Nash's book can be purchased here.