The Safety of Souls: A Critique of Pope Francis' Civil Unions Statement 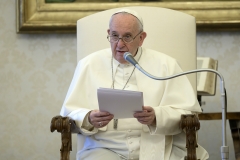 There is a fundamental principle of Catholic moral theology: “The safety of souls is the highest law” (as expressed in Latin: Salus animarum suprema lex). It means that everything the Church does is ultimately oriented to saving souls. Nothing is more important, and nothing should stand in the way of accomplishing that task.

This is why it was determined early in Church history that the Sacraments are valid even in such a dubious circumstance as when the behavior of the priest administering them marks him as a sinful person himself.

It also applies in the common, and equally awkward, situation of wishing to avoid confronting someone over their sinful behavior. The salvation of that person’s soul is the foremost concern. We must not let our desire to be charitable — to focus on their best aspects and politely ignore their worst — encourage the commission of sins that can put souls in jeopardy.

The issue of sinfulness was brought into sharp focus by Pope Francis’ apparent endorsement of civil unions for homosexual persons.

His expression of interest in such legal arrangements, made in a TV interview later included in a documentary film, was received with absolute glee by homosexual activists and their supporters. It was met with horror by Catholics and other Christians who fear that Francis wishes to change Church teaching on marriage and sexual morality.

Let’s step back, take a deep breath, and consider some basic facts.

First of all, the Pope cannot arbitrarily change moral truth. Even when the holy Father acts in his formal capacity as the Vicar of Christ — when he speaks infallibly, or “ex cathedra,” from the Chair of Peter, as expressed in ecclesiological terms — his words must reflect the timeless and universal principles of the Church. And to a considerable degree, they must be put forth only after a consensus has been reached among the world’s bishops on the topic he intends to address.

Francis’ remark about civil unions didn’t rise to the status of an infallible pronouncement. They didn’t even come close. In fact, they hold no theological weight at all.

What he said was merely a personal reflection on the situation of people who experience homosexual desires. No doubt it was made out of charity for their painful life conflicts, and his understanding of the need for family which homosexual persons may feel, since they are often cut off from their own families.

The problem is that he’s the Pope. His words, even those made in the context of a personal conversation, carry special meaning and influence. The worldwide hubbub over his remark about civil unions demonstrates this clearly.

It is a settled matter that homosexual behavior is sinful. This is attested to by Scripture, by Church Tradition, and by Natural Law. It isn’t only the view of a particular religious group — not just Catholic opinion — and it isn’t culturally defined.

Homosexuality is a disordered state. This is true for all places and all times. No amount of activism can change this. No legislation or adjustments to civil law can make it moral.

At the same time, we as Christians are obligated to treat sexually conflicted persons with the dignity they possess as children of God. The Catechism of the Catholic Church states this in no uncertain terms. Paragraph 2358 instructs us that individuals with “deep-seated homosexual tendencies” must be:

“…accepted with respect, compassion, and sensitivity. Every sign of unjust discrimination in their regard should be avoided.”

Even in light of this mandate, however, the Pope’s words on civil unions are questionable and highly problematic. They seem to give approval to sinful behavior. They create the false impression that the Church now says homosexual relationships are acceptable, even equivalent to the love between a man and a woman.

A lot of commentators trying to explain Francis’ remark have pointed out that he has consistently defended the unique status of marriage — that is, real marriage, sacramental marriage, the kind between a man and a woman — not the legal deception of so-called “same-sex marriage.”

But taken to their logical (if fallacious) conclusion, his words actually undermine marriage. Being in a civil union provides virtually all the legal benefits of being married. So what is the unique status of marriage? Does marriage even have a unique status anymore?

This appearance of Church approval is dangerous. It encourages sin — mortal sin — putting souls in jeopardy.

On top of that, it denigrates the marriage bond, contributing to the societal trend away from responsible, permanent male-female relationships that are essential to the formation of families and the healthy and secure rearing of children. Record numbers of people are choosing not to marry. The proportion of children born out of wedlock and the consequent instability of family life is having an alarmingly negative impact.

From the beginning of his papacy, the Holy Father has shown himself to be a man of candor and spontaneity. He’s contributed many colorful and newsworthy quotes — the perfect Pope for the age of sound-bites.

But just as we are called upon to pray for our homosexual friends and relatives that they might examine their consciences and the life paths they’ve taken, Pope Francis might want to be a bit more prudent in sharing his private thoughts.

Surely he knows that the safety of souls is the highest law.