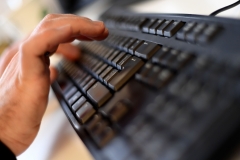 A man types on a keyboard. (Photo credit: KIRILL KUDRYAVTSEV/AFP via Getty Images)

Pornography has been around for a long time. But it’s never been as technically sophisticated or easily accessible as it is today. It’s available on our computers, our tablets, our smart phones. Certain TV channels and websites provide it on demand 24/7. Moreover, the pornographic spirit — if not the most extreme content — shapes much mainstream entertainment intended for mass audiences.

One of the most disturbing aspects of our pornography-drenched culture is its impact on kids. Right now, 15 percent of children aged 12 to 17 report deliberate pornography consumption in the past year. That’s a critical period when individuals are grappling with questions of sexual identity and moral values are coming into clarity and full expression.

The influence of pornography on the maturing brain can shape someone’s entire of life. At a minimum, it tends to encourage sex outside of marriage (with consequent higher rates of abortion). But besides that, it can distort understanding of sexual intimacy, promote false expectations about body image, and instill attitudes that make healthy interactions with the opposite sex difficult, if not impossible.

It’s up to parents to shield their children as much as possible. Kids need the safe haven of home. Yet, our homes are being invaded. Titillating expressions of warped sexuality sneak in through those very communication devices that have become essential to modern life. It’s impossible to keep everything from the kids. But parents have to try.

Their own souls must be in order, however, and as a priest, I can tell you that’s not always the case. I know from long experience hearing confessions that pornography — from casual, occasional indulgence, to full-blown addiction — is a very common problem. I’m tempted to call it an epidemic, and it’s a far more serious and widespread one than COVID.

If pornography is a problem for you, or if you suspect it might be becoming one, check out Covenant Eyes online.