Jesus Is King, Not Biden or Becerra 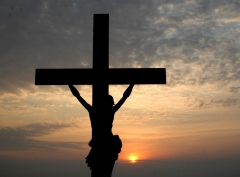 Featured is a representation of Jesus on the crucifix. (Photo credit: NOAH SEELAM/AFP via Getty Images)

The Gospel reading for the Feast of Christ the King (John: 18) presents a moment in Jesus’ trial when Pontius Pilate, Roman governor of Judea, asks him if he is the King of the Jews.

Pilate could very well be considered the “patron saint” of our present age. The biblical account of his behavior during the trial reveals him as the very picture of moral ignorance. He remains uncertain about whether Jesus is guilty or innocent, but finally gives in to pressure from the Lord’s accusers, and agrees to have Jesus killed.

Pilate is best remembered for his famous question, “What is truth?” — which pretty much sums up the obliviousness that prevails today.

As a society, we once looked to the Word of God as the ultimate measure of truth. But we’ve become so uncertain about what constitutes right and wrong that some people reject the idea that there’s any such thing as truth. Others simply make up their own truth according to their feelings of the moment.

Either way, they not only ignore God’s Word, but they actually put themselves in the place of God, making themselves the arbiters of reality. The result is that they can’t recognize actual reality, even when they’re looking right at it.

Our ambivalence on the issue of abortion is a perfect illustration. Ultrasound images make it indisputably clear that a baby in the womb is a living human being. Yet many people continue to hedge on the question of whether it’s moral to end a pre-born child’s life.

Some have gone so far as to dismiss the question entirely. They don’t even care if it’s a living human being, and they certainly don’t factor God (or his will) into their thinking about the matter. In fact, they feel no compunction at all about ending a child’s life, if its presence creates a problem or a serious inconvenience.

The truth is that we have no right to end life arbitrarily, either at home or abroad. This is so as regards the pre-born, those facing the end of life, or those struggling with vulnerabilities in-between. God alone gives life, and decides when it must end. It’s not the prerogative of human beings or of the state.

That is the truth. Yet we are now in the process of raising denial of that truth — denial of reality — to a global scale.

Close to our concerns as Catholics, Secretary of Health and Human Services Xavier Becerra is leading an effort to roll back conscience protections provided under the Religious Freedom Restoration Act of 1993. His effort would forbid hospitals (one out of every six of which is run by the Church or some Catholic organization) to avoid participating in abortions.

It would also require those Catholic hospitals to provide conception assistance to what are called “socially infertile people” — that is to say unmarried individuals or people in same-sex relationships.

Speaking of truth, during his confirmation hearing, Becerra had claimed a deep commitment to religious freedom. One should note, however, that it was he who had argued before the United States Court of Appeals that the Little Sisters of the Poor should be required to provide birth control-related insurance coverage to its lay employees under the Affordable Care Act.

All this is of a piece with the mandates being imposed on hospitals, doctors, and health workers over vaccination. Institutions that had provided services for two years during the pandemic are now being threatened with loss of Medicare payments if they don’t force their critical personnel to accept inoculation with substances whose effectiveness is highly questionable, and whose dangers are becoming increasingly obvious. Personal religious exemptions are being curtailed.

This assault on individual autonomy is a moral wrong. It’s an attack on religious freedom. And that is the truth.

Not everyone is blind to the truth, of course. But even among those who do recognize reality, some hesitate to speak the truth.

Out of fear of offending the sensitivities of others, of losing friendships and popularity, or these days, the more substantial fear of job loss or some other form of retaliation in our “cancel culture,” they keep their recognition of truth to themselves.

Their fears are not unjustified. In a sense, it was because he offended people that Jesus was condemned. The truth he spoke was too insightful, too challenging, too threatening for them to bear. They preferred the comfort of their own familiar versions of truth.

But then, as Pilate asked, what is truth?

His question echoes today. And we had better answer it before we lose all our freedoms.

Jesus said, “I came into this world to testify to the truth. Everyone who belongs to the truth listens to my voice.”

Jesus is the king — not Joe Biden, not Xavier Becerra — and there is no truth but the Lord.