A Crisis of Trust and Civility 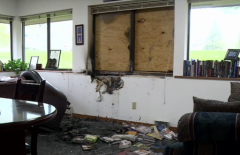 Pictured is damage from a pro-abortion arson of the headquarters of an anti-abortion, Wisconsin Family Action. (Photo credit: YouTube/FOX6 News Milwaukee)

The recent leak of a preliminary Supreme Court ruling, drafted by Justice Samuel Alito, has prompted strong reactions. Those of us who defend unborn life are excited at the prospect that, as the draft suggests, Roe v. Wade is about to be overturned. Abortion supporters, on the other hand, are incensed.

All the excitement and anger, all the commentary and demonstrations have overshadowed the highly unusual circumstance by which this document came to light: Somebody on the Court staff stole a copy and passed it on to the media. This is extremely rare, perhaps completely without precedent. And it is a source of grave concern.

It can be viewed only as an attempt to disrupt the process by which the justices deliberate cases, if not to delegitimize the Court entirely. As such, it damages our entire legal system.

The leaker (or leakers) undoubtedly understood that the imminent prospect of overturning Roe v. Wade — the key underpinning of legal abortion — would set off an explosion, as indeed it has. This act was likely done in collusion with some pro-abortion group with media connections, able to channel the document to a cooperative outlet.

The result has been mass demonstrations in Washington, as well as in various other parts of the country. Protesters have invaded Catholic churches, disrupting Masses. The headquarters of a Wisconsin pro-life group has been attacked by Molotov cocktail-wielding arsonists. The home addresses of Supreme Court justices have been distributed to protesters, so that mobs can descend on them.

Clearly, the object is to intimidate justices into changing their decision, essentially to bully them into submission.

Both the leak and the subsequent demonstrations are despicable. This is not the way things are done in America. At least, it’s not what should be done. Rather, it’s what communists do, over and over around the world. And now it has come here.

But in a way, this situation isn’t surprising. It reflects the abandonment of civility that’s evident throughout our society, starting with our schools. We no longer teach civility.

I wonder how many people remember hearing a teacher or a coach say: “It’s not whether you win or lose, but how you play the game.”

That line expressed a sentiment that was perhaps a bit naïve. No doubt there have always been a lot of people who said it, knowing all the while that they would do anything to win.

Nevertheless, it conveyed a noble ideal. And the fact that it was given at least lip service testified to the importance of the concept in our understanding of basic virtue.

Does anyone still say such words? The many scandals in sports today — including in school and college athletics — reflect our current outlook: Do whatever you can (or at least whatever you can get away with), as long as you come out on top.

Winning is all. Winning is what counts: getting your own way. It’s the philosophy that’s so evident in our politics. And it’s been embraced with special fervor by the Left.

Civility depends on trust. The leaker (or leakers) betrayed the trust essential to how the justices interact, with their staffs and with each other.

The damage is enormous. The wound to our entire court system — the Judicial Branch of government — will be years healing.

Perhaps the worst part is that the Executive Branch — the president and the law-enforcement apparatus charged with defending our Constitution and our courts — remains silent. Of course, that’s not surprising either. This administration is an agency of the Left. Its commitment to abortion is total.

We’ve come to an especially low point in the Biden years, an era that seems to reach one low point after another. Our legal system has been undermined, as is people’s faith in government and its institutions.

Pray for our country. God save America.