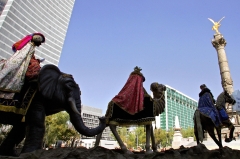 “We three kings of orient are

Traditions associated with Epiphany come readily to mind the week after Christmas. But, for the most part, they’re just that: traditions.

The Bible is silent on whether those famous “kings” actually bore any kind of aristocratic rank. It doesn’t even say there were three.

Mostly we refer to them as “wise men.” And we take that to mean they were astrologers — probably Zoroastrians from Persia — since it was the appearance of a new star (or possibly a comet) that captured their interest, and set them on their journey.

Such keen observers of the heavenly bodies were held in high regard. Celestial displays were considered signs of godly activity and portents of developments on earth.

Accordingly, King Herod received the travelers from afar at his palace, honoring their dignity as scholars, and probing for what they might know about events to come. His interest was decidedly unspiritual. He was worried about rumors of a “new-born king,” a potential challenger to his dynastic rule.

Fortunately, the wise men were wise enough to sense what Herod was up to. They warned Joseph and Mary about the king’s interest, and then slipped out of town by another route.

They were also wise enough to understand that there is an aspect of life beyond the material world — that human beings have a greater destiny than mere everyday existence. This knowledge is what disposed them to make their journey in the first place. And it speaks to the point of Epiphany that’s often overlooked.

There’s an essential clash of worldviews at the heart of this story: the religious versus the secularist. Three renowned men of wisdom, spiritual insight, and mystical faith stand in stark contrast to Herod’s worldly preoccupation with raw power.

That image is especially relevant at this present moment in history.

As Herod perceived a threat in the purported “new-born king,” events of our time continue to demonstrate how the rulers of this world cannot tolerate anything greater than themselves.

The most visible example is Communist China, where Christians are being oppressed, and churches (especially Catholic) have come under direct government control. It’s reported that pictures of Party Secretary Xi Jinping have replaced images of Christ in some parishes.

Other religions too, including Muslim Uighurs and Tibetan Buddhists, are under persecution, as are practitioners of spiritual/philosophical systems such as Falun Gong.

This follows a pattern observed in all communist countries. Rulers believe they can — and must — control every aspect of individual lives, especially those essential beliefs to which people give the loyalty that, it’s assumed, should go only to the state.

But such assumptions aren’t exclusive to communist regimes. Shamefully, the dominant class in our own country seems to have embraced the idea that it can demand everyone’s loyalty and direct everyone’s thinking.

Consider the censorship of religious ideas and moral opinions taking place on social media. In case you’re not aware, Christian writers are being “cancelled” left and right.

Add to that government edicts — issued in the name of public health — to restrict worship services and faith-related events, as well as efforts to circumvent religious reservations about mandated vaccinations.

And don’t forget the pressure being exerted on pastors against upholding the traditional understanding of sex, and defending moral standards of behavior. That pressure is often expressed in direct or implied threats about removal of church tax-exempt status.

Such things are happening more and more, and they have practical consequences.

For one thing, they’ve created an atmosphere that encourages attacks on church structures and religious symbols. They’ve also unleashed outbursts of anti-Semitism. New York City, center of the Orthodox Jewish community, has seen a spike in assaults on Jews wearing religious garb, as well as desecration of synagogues and cemeteries, and vandalism of Jewish-owned businesses.

Religion invites us to focus on the transcendent. And in the eyes of worldly rulers, nothing must transcend their assumed position of all-knowing leadership.

They’ve been highly successful in persuading people to accept their assumptions. Religious influence has declined markedly, as polling numbers demonstrate.

In 2007, some 78 percent of Americans said they considered themselves Christians. The latest data show this has dropped to 63 percent. In 2007, some 16 percent identified themselves as “nones” (people who have no affiliation with a specific organized faith). The percentage of “nones” has since risen to 29.

These are startling changes over only 15 years. They show an undeniable growth in secularism. Yet at the same time, many people recognize that, having rejected the transcendence of traditional faith, they feel an emptiness in their lives that must be filled.

This is especially true of young people, who often turn to radical politics and socialist utopianism (even communism) as secular substitutes for faith.

Others search the Internet for new versions of ancient pagan religions with which to identify themselves, and give meaning to their lives. Some actually take part in shamanistic rituals, or embrace the cultic practices of the ancient Druids.

This reflects a basic emotional need of human beings for the transcendent, for some kind of “higher knowledge.” And you don’t have to experience the solstice sunrise at Stonehenge to observe it.

At the everyday level, you can see it in the devotion to “following the science” that’s become an obsession of the pandemic. On a more exotic plane, it’s expressed in the growing fascination with so-called “trans-humanism,” or with psychology-based “religions” such as Scientology.

All of these practices fit neatly into the increasingly secular atmosphere. They’re devices that allow us to think of ourselves as “spiritual” or “elevated” or “enlightened,” without challenging our worldly preoccupations, diverting our loyalties from the state, or burdening us with (Ugh!) going to church.

How have we come to this?

But it does have political components, just as it also has an economic dimension. There are rich and powerful people who see increasing the secularist character of society as conducive to their vision of extending monopolies, introducing new currencies, and tightening centralized control over the flow of wealth.

This vision is referred to by several terms, including the “Great Reset” and the “New World Order.” And it’s being promoted by many elements: the tech firms, the media, the sports and entertainment companies, the banks and financial institutions, the pharmaceutical giants.

(There’s good reason to assume that mandates, quarantines, vaccination passports, and other concepts to emerge from the pandemic are being exploited as means to advance this vision. That makes sense, since they bring our lives more thoroughly under official scrutiny.)

It’s obvious that all of this involves extensive coordination.

What can maintain such a high level of control? Who can direct it?

Is there a Herod of our day? Is there a central entity totally obsessed with raw power — and thus willing to distort the reality God has created — working diligently to overwhelm traditional Faith with a tsunami of secular influences?

It is this Faith that gives us our human dignity, our individual freedom, our destiny. It’s what raises us above the servile constraints of everyday life.

It is this Faith which must be destroyed in order for Herod to secure his power.

“We three kings of orient are