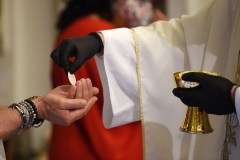 It may seem strange to say it, but this past year of pandemic has brought blessings in unexpected ways.

For one thing, it’s provided a time for thinking and reevaluating. We’ve been given a unique opportunity to reflect on our relationships — with our families, with our friends — and so to gain a new appreciation for how important those we care about really are.

Many of us were unable to visit relatives, even when the need for personal contact was urgent.

In my own case, my sister advised me to reconsider my plan for a visit home to New Jersey, unless I was prepared to stay two full weeks. If I tried to leave the state prior to then, I might be forced into quarantine.

We’ve had to live with numerous restrictions — not only on our freedom to travel, but even on such mundane freedoms as where we’re permitted to eat or shop. And of course, we’ve had to accept wearing masks, something I’m still not used to. I miss seeing people’s faces.

But all of this has helped to make us more aware of how freely we’re accustomed to living our lives as Americans. And that’s an insight for which we should be grateful.

We should also be grateful for the profound reminder we’ve gotten about how fragile life is. The death count loomed large this year, especially in the early weeks, when it seemed COVID might become a terrifying, unstoppable plague. Many became perversely addicted to reports and statistics of people who were sick or who had died. A sneeze or a tickle in the throat made everyone wonder: Do I have the symptoms?

But this heightened awareness too has been a good thing. It’s served as what the Church calls “memento mori,” a reminder that life is finite, that death awaits all of us.

And so — to adapt a current political cliché — this year of crisis didn’t go to waste. It encouraged us to examine the realities of life.

Perhaps the thing that’s surprised me most is that this has been a wonderful year to be a priest.

It’s all too easy for priests to take our role for granted, even lose our sense of self worth. We go through the same actions day after day. And it must be said that we can no longer count on the regard people showed for clergy in years past.

How many times I’ve heard from my brother priests, “It’s not what it used to be.” And even if, in reality, nothing is what it used to be (for good or for bad), we can easily become despondent. From time to time, we need a reminder of how important the priesthood is, and that’s what this pandemic year has been. It’s certainly so for me.

Two occurrences involved with administering sacraments brought that into sharp focus. In the first instance, a man who asked me to hear his confession revealed a burden of grave sins. It was his first confession in some 40 years (a good biblical number), and it prompted him to write me afterward to thank me and to express his wondrous sense of relief at receiving absolution after such a long time.

I felt like I had done a good day’s work. A soul was saved. God couldn’t have given him — or me — a better gift.

In the other instance, I went for a hospital visit to administer the anointing of the sick to someone in the Intensive Care Unit who was gravely ill. I must admit feeling a certain hesitation about going into the ICU, but it proved a remarkable experience.

First, I was impressed by the care and professionalism of the nurses who suited me up in anti-infection gear. My outfit was extremely elaborate (I looked like someone who had come from outer space), requiring much time and attention to detail on their part.

Second, the patient’s family asked if the anointing ceremony could be live-streamed. Unable to be physically present with their loved one, they still wanted to share in this important moment. I was deeply touched by the love expressed, even at a distance. And so people in different parts of the country watched the anointing.

Both of these instances — that of the man’s first confession after four decades, and that with the patient facing death — were prompted by circumstances related to the pandemic, and both in some way revealed how people depend on their priests.

Everyone still needs the experience of penitence, even if they don’t go to confession as often as they used to. People still need comfort and resolution at the end of life. The sacraments involved are of the utmost importance, and only priests can administer them.

That’s the power of the priesthood. Sometimes I’m awed when I think about it.

And just as priests administer the sacraments to their people, so the people administer a kind of “sacrament” to us.

After all, what is a sacrament? It’s an outward sign instituted by Christ to give grace. And the “sacrament” I’m talking about is the people themselves — you — who give grace to your priests. We need you to support us, to encourage us, and to love us.

That’s become clearer to me this year than ever before. And that’s why, for all the trials and loss and frustration involved in this pandemic, I see a tremendous blessing.