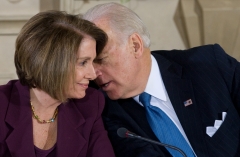 A September Gospel reading mentioned Gehenna (the Valley of Hinnom), an ancient site outside Jerusalem.

The Book of Jeremiah calls Gehenna a place that’s cursed, and with good reason. It was where the bodies of babies offered in sacrifice were consumed by fire.

We seem to be in the process of creating our own Gehenna — more than one, actually — where we sacrifice children to our modern gods of ambition, convenience, and self-determination.

Just a few days ago, the House of Representatives passed what’s called the Women’s Healthcare Protection Act. With a name like that, you might assume this was an effort to ensure that women have ready access to treatments for breast cancer, menstrual difficulties, or other female infirmities.

But of course, it was about abortion. Our progressive “spin doctors” have boundless nerve in calling the killing of infants “healthcare.” It’s clever packaging, intended to pull the wool over the eyes of trusting folk, and make murder sound like something positive.

This act is the most sweeping abortion law ever passed. It removes all state restrictions on abortion, requiring unlimited access from the beginning to the end of pregnancy (including partial-birth abortions).

It eliminates all rules about informed consent, by which those seeking abortions have the procedures explained to them, or view ultrasound images of the babies in their wombs. It prohibits imposing waiting periods before a procedure can be performed.

It forces hospitals to offer abortions, and forces doctors and nurses to perform them. It requires companies to include abortion coverage in their insurance plans. It provides government funds (that is to say, your tax money) to pay for the procedures when women have no health insurance coverage or are on welfare.

Perhaps most shocking, it removes all requirements for parental consent for minor girls to obtain abortions. Parents need not even be told.

The measure passed the House by a vote of 218 to 211. Every Democrat but one, Rep. Enrique Cuellar from Texas, voted for it.

This is the party that constantly urges us to “follow the science” in health-related matters. How many of these science-oriented Democrats have viewed ultrasound images that unmistakably show babies in the womb to be living human beings?

Of course, this bill was aggressively promoted by the president and the speaker of the House, both of whom claim to be faithful Catholics.

But then, as we’ve seen many times, people are often willing to defend the precepts of faith only when it’s faith as they imagine it. Likewise, they “follow the science” only when it’s their version of science.

Why is this radical measure being pushed so hard right now, when the Biden Administration remains under a cloud regarding the legitimacy of the last election? Why now, when there’s chaos on our southern border, and we’ve just witnessed the disastrous and humiliating withdrawal from Afghanistan?

Don’t the Democrats have enough controversy to deal with?

The answer, of course, is that the Supreme Court is about to hear the case of Dobbs v. Jackson Women’s Health Organization. That litigation, out of Mississippi, is set to begin Dec. 1, and holds the real possibility that Roe v. Wade could be overturned.

The Democrats are taking action now to codify unrestricted abortion access for every woman in the country under any circumstances — no questions, no limits, no waiting. And this is of the utmost importance to abortion advocates.

Where Roe v. Wade was an opinion as to the constitutionality of abortion, the Women’s Healthcare Protection Act, if passed by the Senate, would become the law of the land.

As federal law, it would supersede any state laws, making it pretty much impossible to limit abortion in any way.

The justices could very well hold to the principle of stare decisis (“let it stand”), which says that precedent should dictate. Roe v. Wade supporters argue that since abortion rights have been recognized since 1973, longevity makes them unassailable.

And stupid as that argument might seem, the Court could agree — even though most legal scholars hold that Roe v. Wade was wrongly decided, and the Constitution contains no right to abortion.

Another situation prompting the Democrats to act now is the recent decision by the Court not to block implementation of a Texas law allowing civil suits against abortion providers.

This was a procedural ruling, not a final decision on the constitutionality of the law. It has to work its way through the lower courts, and other states are watching. If it stands, this Texas statute might be duplicated elsewhere, because it could provide a potent weapon against abortion, whether or not Roe v. Wade is overturned.

And so the Democrats have their reasons for not being willing to bet on these legal deliberations. They’re moving now to secure abortion access through explicit and unambiguous “black letter” law.

This bill must never make it to the Senate. And I urge everyone to tell their senators how evil and repugnant it is. Call, write, text, email, telegraph your senator now. Use Facebook Messenger. Visit your district senate office.

Make your voice heard any way you can.

I have a fantasy about making my own voice heard. I’d love to be the priest at a Mass attended by Joe Biden and Nancy Pelosi. I’d preach on this Gospel that mentions Gehenna, drawing particular attention to Jesus’ description of it as a place of “unquenchable fire.”

I’d also be sure to mention that elsewhere in the passage, our Lord notes that someone who causes others to sin would be better off tying a millstone around his neck and jumping into the ocean.

My fantasy has a special timeliness as this horrid bill makes its way through the legislative process. I would hope Biden and Pelosi get the message.