Be Not Afraid, Focus on Christ 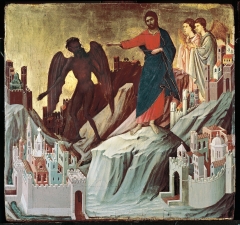 People often put the wrong emphasis on the Gospel story of Martha and Mary (the sisters of Lazarus, whom Jesus raised from the dead). We tend to immediately sympathize with Martha, buzzing about getting dinner for the honored guests, Jesus and his companions, while Mary sits at Jesus’ feet, listening to him teach.

The scene has special resonance for women, who often find themselves in similar circumstances, feeling unassisted and unappreciated.

But poignant as it is, Martha’s complaint about being left to prepare the meal alone isn’t really the point of the story. In his usual perceptive way, Jesus cuts right to the heart of the matter.

“Martha, Martha,” he says, “you are anxious and worried about many things.”

That’s where we should really identify with Martha’s plight. Most of us spend our lives filled with anxiety.

Everyone has concerns, whether about money, health, work, family, or whatever — especially so in this post-pandemic time. We’ve been bombarded for two years with warnings about infection, and heard a progression of increasingly desperate appeals to be vaccinated.

Now, with the deterioration we’ve witnessed in the economy and the competence of government, we’re filled with fear. We worry about everything, sometimes to the point of depression and the need for chemical relief.

Whether you need anti-depressants is a topic for you and your doctor. I never make judgments about people’s medical requirements. If you need it, take the pill.

But, it can’t be denied that “Big Pharma” is getting bigger promoting these medications. According to some sources, at least 25 percent of people over the age of 18 are on some kind of prescription anti-depressant (this doesn’t count the unknown numbers of adults and children who obtain drugs outside the legal channels of distribution).

You can’t watch TV without seeing a stream of ads for the latest cleverly named remedy. And despite the upbeat scenes of happy people leading fulfilled lives, all those messages are designed to play on our fears.

Fear is crippling, and its effects are felt throughout our entire society. Once we’re crippled by fear, we are no longer free.

This raises questions about at least some current efforts to stir up of our fears — not just in the pharmaceutical field, but across a whole range of marketing and political agendas. In particular, we might question the role of the major media in keeping our fear level high.

When we’re crippled by fear, we’re afraid of everything. We’re afraid to go out of the house, lest we come into contact with some new and more virulent COVID strain.

Little children are indoctrinated in fear, still being forced to wear masks, and sit at desks separated from the kids next to them by Plexiglas partitions.

We’re afraid to express an opinion, lest we should contradict the latest set of trendy ideas, be doxed or cancelled online, and draw criticism from people who hold different viewpoints.

There are other topics that stir fear, most prominent among them the environment. I have no idea if the Earth is getting warmer, or if so, what’s causing the change. But there are many people who live in absolute dread of the polar ice caps melting, oceans rising, and cities like Miami being covered with water.

Children, and people who reside in coastal areas, are especially preoccupied with such frightening scenarios. Whatever your environmental views, this is not a good thing.

We’re even resurrecting the fears of bygone eras. As if there wasn’t enough disturbing program content on television, a public service ad currently running in New York City offers practical advice about what to do in case of a nuclear attack. Echoing the “duck and cover” drills which people my age remember from school days in the 1950s, the spot adds one more layer of paranoia to life in “The Big Apple.”

Who benefits from our anxieties? And what’s in it for those who do?

The answer to the first question is obvious: the pharmaceutical companies, big tech firms, the media (both legacy news organizations and social networks), and most of all, government.

The second answer is just as obvious: When people are fearful, they are easy prey for efforts to control them, because they want those who have power to step in and make problems go away — to remove the sources of their fear.

If you question this assessment, ask yourself why, within two years, we’ve gone from the most booming economy in our history to predictions of recession, even economic depression.

One of the best-remembered sayings of Jesus is “Do not be afraid.”

He wants us to not be slaves of fear, but rather to be free and fully alive. Because fear ruins our lives. It’s ruining society.

The solution is what he told Martha: “Mary has chosen the better part.” That is to say, she chose to focus on him.

Open your Bible. Read the scriptures. Focus on Jesus.

This essay is based on a homily delivered by Fr. Orsi. It can be viewed online at: https://www.youtube.com/watch?app=desktop&v=1Pc1FBYUqUI