Americans Are Now Witnessing the Cost of Discipleship 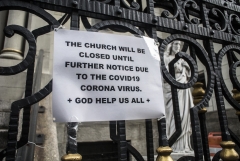 A sign informs patrons that a church is closed during the coronavirus pandemic. (Photo credit: Bill Tompkins/Getty Images)

The 56 men who signed our Declaration of Independence made their case that the American colonies should separate themselves from Great Britain by listing the King’s abuses of his subject people. They then demonstrated their commitment to the path of liberty by concluding the document with an extraordinary resolution:

“…with a firm reliance on the protection of Divine Providence, we mutually pledge to each other our lives, our fortunes, and our sacred honor.”

All knew that putting their names on the Declaration and waging war against Britain could bring the penalty of death.

In a later era, Dietrich Bonhoeffer a Lutheran pastor in Germany, opposed Nazism. He operated an underground church and seminary until he had to escape from the country with Hitler’s agents hot on his trail. Coming to the U.S., he taught for a time at Union Theological Seminary in New York City.

Bonhoeffer found the preaching in mainstream Protestant churches to be rather empty. In the black churches of Harlem, on the other hand, he heard the Gospel message “clear and raw.” This encouraged him to go back to Germany where his people where suffering under Nazi oppression. He was arrested, and was executed in a concentration camp just a couple of weeks before it was liberated by American troops.

Those who signed the Declaration of Independence were “in it” completely. They were entirely devoted to a cause in which they thoroughly believed, even if they weren’t saints in their personal lives. Neither was Bonhoeffer’s life beyond question. Along with his preaching, he became involved in an active plot to assassinate Hitler.

Right now, our country has reached a very dangerous crossroad. It’s a point where we have to consider the cost of our own discipleship. Churches are being threatened by radical elements, and even more so by an overweening state.

This situation was illustrated last week when the Supreme Court issued a ruling in a case titled Calvary Chapel of Dayton Valley vs. State of Nevada. The governor had restricted churches to 50 percent attendance for religious services, while casinos, operated by Nevada’s powerful gaming interests, were permitted to function at full capacity.

In a 5-to-4 decision, the Court upheld the state’s restrictions on churches. Regardless of the legal particulars at issue, this ruling sends a clear message that going to gamble at Caesar’s Palace is more important than going to church.

The state of Nevada doesn’t have the right to make such a judgment. Religious exercise has always enjoyed the protection of the First Amendment. Gambling has not.

It’s long been understood that only the most compelling state interest can justify restricting the practices of churches. Short of inflicting some serious harm to the community, they must be given the broadest possible latitude. Government has never been able to just arbitrarily tell them what to do.

But that was then. This is now.

Religious freedom is being threatened. A small seed of state domination has been planted. If government can tell churches how many people can worship, eventually it will tell churches to be quiet, not to preach the Gospel when Christian teaching conflicts with other state directives.

We’ve seen such attempts already — for instance, in government efforts to force religious organizations to provide insurance coverage for birth control and other morally objectionable procedures. That line has held, at least for the time being. There’s no guarantee it will hold in the future.

The Gospel is a message of freedom. God’s Word cannot be contained. The State has no authority over the Church.

Right now we can believe, and we can preach. We’re not in jeopardy of going to jail for our faith.

But the day may come — and sooner than we might think.

We are being forced to recognize that, in Dietrich Bonhoeffer’s words, there is a "cost of discipleship."