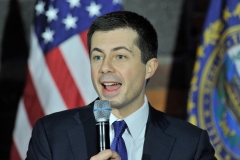 Secretary of Transportation Pete Buttigieg wants to make the United States the global leader in high-speed rail. That’s like wanting to be the world leader in electric typewriters, rotary telephones, or steam locomotives, all technologies that were once revolutionary but are functionally obsolete today. High-speed trains, in particular, were rendered obsolete in 1958, when Boeing introduced the 707 jetliner, which was twice as fast as the fastest trains today.

Aside from speed, what makes high-speed rail obsolete is its high cost. Unlike airlines, which don’t require much infrastructure other than landing fields, high-speed trains require huge amounts of infrastructure that must be built and maintained to extremely precise standards. That’s why airfares averaged just 14 cents per passenger-mile in 2019, whereas fares on Amtrak’s high-speed Acela averaged more than 90 cents per passenger-mile.

Highways require infrastructure but not this level of precision. While a four-lane freeway costs about $10 million to $20 million a mile, California ended up spending $100 million a mile building its abortive high-speed rail line on flat ground, and it predicted building in hilly territory would cost at least $170 million per mile.

In 2009, President Obama proposed that the United States build 8,600 miles of high-speed rail lines in six disconnected networks in the Northeast, South, Florida, Midwest, California, and the Pacific Northwest. Without ever asking how much this would cost, Congress gave Obama $10.1 billion, which (after adding $1.4 billion of other funds) Obama passed on to the states. Except in California, no one expected that these funds would produce 150-mile-per-hour bullet trains, but they were supposed to increase frequencies and speeds in ten different corridors.

Now, more than ten years later, what has happened with those projects? One corridor saw frequencies increase by two trains a day. That corridor and two others saw speeds increase by an average of 2 miles per hour. Three other corridors actually saw speeds decline by an average of 1 mile per hour. Four corridors saw no changes at all. The one corridor that saw both frequencies and speeds increase also saw ridership decline by 12 percent. Effectively, the $11.5 billion was all wasted.

We now know, based on California’s experience, that constructing true high-speed rail in all of Obama’s 8,600 route miles would have cost well over $1 trillion. Unlike the 48,000-mile Interstate Highway System, which cost about half a trillion in today’s dollars but was paid for entirely out of highway user fees, none of the cost of building high-speed rail lines would ever be covered by rail fares. In fact, fares won’t even cover operating costs on most if not all proposed routes.

Rail advocates want to ignore the dollar costs and instead argue that we should have high-speed trains because they are climate friendly. But building high-speed rail releases thousands of tons of greenhouse gases into the atmosphere for every mile. Even if operating the trains produced fewer emissions than planes, and there’s no guarantee that it would, it would take decades to save enough to make up for the construction cost—and the rail lines must be effectively rebuilt, releasing more carbon dioxide, every 20 to 30 years.

China has built 22,000 miles of high-speed rail lines and that construction has helped put China’s state railway nearly $850 billion in debt. Since this debt is unsustainable and many of the high-speed rail lines, says a Chinese transportation economist, are “bleeding red ink,” the country has slowed its construction of new lines. Far from getting anyone out of cars or planes, both air travel and highway travel are growing much faster than rail travel in China.

If we are to emulate China’s transportation system, we should look instead at its freeways. Including the interstates and other freeways, the United States has 67,000 freeway miles and is building fewer than 800 new miles a year. China, whose land area is about the same as ours and which has about the same number of motor vehicles as the United States, had 93,000 miles at the end of 2019 and is building 4,000 to 5,000 new miles a year.

China’s road construction isn’t slowing down because the roads pay for themselves out of tolls. China also realizes something that American political leaders have forgotten: highways drive economic growth because, unlike Amtrak or public transit, they are used by the vast majority of people.

Where Amtrak trains were only about half full before the pandemic, many of America’s freeways were filled to capacity during much of the day. This congestion costs commuters $166 billion a year and costs shippers even more. While the pandemic reduced some of that congestion, motorists are driving about 90 percent as many miles as before the pandemic and there is still considerable congestion.

The best thing about highways is that they can pay for themselves. Unfortunately, the mechanisms we use to pay for roads, including gas taxes and vehicle registration fees, are archaic. They don’t adjust for inflation, they don’t adjust for fuel-efficient cars, they don’t cover the costs of city and county roads, and they don’t do anything to relieve congestion.

If Buttigieg wants to return the United States to global leadership in transportation, he should find and promote mechanisms that will allow and pay for the construction of new highways that will relieve traffic congestion, improve safety, and generate new economic growth. He actually suggested one such mechanism during his presidential campaign: mileage-based user fees. The last thing we need is more deficit spending building obsolete infrastructure that few people will ever use.

Randal O’Toole is a senior fellow at the Cato Institute, specializing in transportation and land‐​use issues. He has authored six books ranging from "Reforming the Forest Service" to "Romance of the Rails" plus numerous policy papers and articles about free‐​market approaches to housing, transportation, and other issues.

Editor's Note: This piece originally appeared on the Cato Institute.