A Prayer for Israel Under Attack 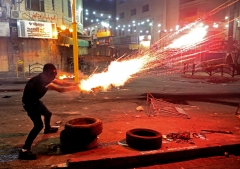 A Palestinian launches flares amid clashes with Israeli soldiers in the city center of Hebron. (Photo credit: HAZEM BADER/AFP via Getty Images)

Lord, it is with heavy heart that we approach you today in prayer on behalf of our brothers and sisters in Israel who are the target of thousands of rockets coming from Hamas and Islamic Jihad, and whose homes are being broken into and burned by violent Arab youths and adults fueled by a jihadist theology to murder their Jewish, and Christian, neighbors.

Many on the left and in the media have taken the side of the terrorists and demand that Israel be prohibited from defending themselves, disingenuously calling that a requirement for peace. But as the Prophet Jeremiah warned: “Peace, Peace? There is no Peace.” And that is because, pushed by Iran and guided by jihadism, Hamas and the Palestine Liberation Organization (PLO) are engaged in an unrelenting war to annihilate Israel and destroy the Judeo-Christian, biblical world. We are what they call “infidels." Further, they refuse to accept history and God’s word bequeathing to the Jewish people the inheritance of Jacob, Land of Israel.

We are exceedingly distressed that America is now under a new administration that in its folly and delusion is appeasing Iran and pledging $235 million to the PLO agenda. Is it a wonder then, that after four years of calm under President Trump, the Iranian-supported Hamas and PLO feel comfortable now and financially secure enough to once again attack the Jews, just as they did during the Obama years?

We Americans are sick-at-heart hearing the Biden State Department refer to the Jewish Temple Mount by an Arab/Islamic name. Whereas we were proud just a few years ago when, under Donald Trump, America decided to recognize Jerusalem as Israel’s capital, we Americans are forced now to behold our country immorally complicit in denying the historic Jewish status of Jerusalem’s City of David.

But Lord, you have forewarned us in Scripture that “the wages of sin are sin” and that one sin begets another sin. Let us ponder this. It is inevitable that a side and outlook whose so-called “values” disregard the life of the unborn is indifferent to the holiness embodied in traditional marriage, often mocks biblical Christian observances, pushes to confuse our children regarding their God-given gender,  demonizes people born white, labels patriotic nationalism as something “extreme” and our country’s “greatest threat," that is ashamed of America’s founding principles and heroes, and labels its Caucasian citizens as systemically racist would necessarily, also, pressure Israel, question its sovereignty over Jerusalem, and cozy-up to Iran, and financially support Palestinian Arab terrorism. Yes, it is inevitable and predictable.

The socialists proudly call this “intersectionality,” linking all these vices into one, unified outlook. We, however, know it for what it really is: a repudiation of the biblical Judeo-Christian outlook. It is simpatico with evil and a rejection of that which is wholesome and noble. In the timeless, never-ending battle of Godliness vs. that which is Demonic, intersectionality has chosen the Dark Side.

So Lord, give us the strength not to falter nor lose our spirit and confidence. Let us march forward by continuing to Know What We Believe and keep believing what we know to be true -- that which has been handed down to us from generations previous and from ancestors imbued with practical wisdom, self-respect, and a sanctity born of a biblical heritage. With You, Almighty, we shall prevail…and let us say Amen.

Rabbi Spero is president of Caucus for America and author of "Push Back: The Battle to Save America’s Judeo-Christian Heritage."