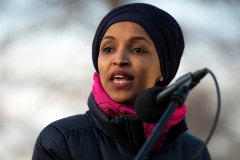 Over two years ago, back in March 2019, Conference of Jewish Affairs went to Washington D.C. and led a powerful protest in front of Speaker Pelosi’s office demanding she adopt a resolution in Congress condemning Ilhan Omar for her anti-Jewish remarks and that Congress condemn anti-Semitism as a stand-alone evil.

Omar was poisoning the hallways and chambers of Congress with her brazen anti-Jewish statements. Every few weeks, Omar shoots another anti-Jewish poison arrow and makes statements calling for the end and destruction of the Jewish State. Nancy Pelosi, who wants Omar’s Democrat vote in Congress, has continued to enable Omar’s and the Squad’s influence in Congress.

Conference of Jewish Affairs has sent a letter to House Minority Leader Kevin McCarthy in support of his censure resolution to stop Omar’s constant anti-Semitic, end-of-Israel, and anti-U.S. rhetoric.

By now it is obvious to all that Omar’s “apologies” are insincere, and Omar is engaged in trickeries to keep herself viable until her next round of defamation of Jews and calls for the destruction of Israel.  Yet Pelosi has decided to tolerate this anti-Semitism in her ranks. Nancy Pelosi irresponsibly responds that Omar "is a valued member of our caucus.”

Conference of Jewish Affairs urges that Omar be removed from the highly influential Foreign Affairs Committee.  She has used her perch and visibility on this committee to spout her end-of-Israel, demonization of America agenda. She has compared America to the Taliban and Hamas. She implies America is a terrorist nation. We know that we cannot remove her from Congress since that is up to the people in her Minnesota district.  But we can, and should, demand Omar be removed from the House Foreign Affairs Committee, and Minority Leader McCarthy indeed plans to call for a vote on this matter.

Two years ago, Conference of Jewish Affairs asked then-Chairman Eliot Engel to remove her. Engel was weak and refused to do so. This weakness is prevalent throughout virtually all of the Democrat Party, whose members in Congress remain unwilling to condemn Omar’s atrocious statements.  Worse, only a handful of the many Jewish Democrat congressmen have been willing to condemn her anti-Semitism. They are following orders. Unfortunately, they are putting their careers and Democrat Party power above the safety of American Jews. Most of the Democrat Jewish congressmen and senators seem content to allow these anti-Jewish activities to continue rather than risk their career, though they are the first to display outrage when black, Muslim, Latino, or LGBTQ communities are perceived as being mistreated.

Finally, many establishment Jewish organizations, most notably the ADL, whose purported purpose is to safeguard the physical day-to-day life of Jews here in America, have been AWOL on strongly condemning Omar, Tlaib, and Ocasio-Cortez or specifying the Islamist groups and ideology behind the violent attacks in recent weeks against Jews walking on the street, eating in restaurants, and coming and going to synagogues. It has become apparent they condemn anti-Semitic pronouncements and activities only when coming from what are labeled white groups or the political right.  But beyond doubt, anti-Jewish words and pronouncements, as well as shrill voices demonizing Israel, filter down to all areas of public and civic life, resulting in the attacks against Jews we are now seeing.

We at Conference of Jewish Affairs will not remain silent.  The notorious anti-Israel, anti-Jewish, America-bashing Ilhan Omar should be removed from her position on the highly influential House Foreign Affairs Committee and we support Minority Leader McCarthy in his common sense and noble efforts to censure her, which is the right thing to do.

Rabbi Spero is author of Push Back and president of Conference of Jewish Affairs.