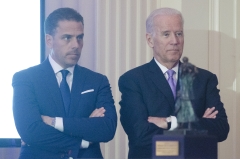 Giuliani promptly brought the laptop to the attention of the New York Post. The Post authenticated it and validated its content, interviewing the owner of the computer-repair shop where Hunter dropped the laptop off as well as various associates of Hunter who appeared on the computer's hard drive. The editors of the New York Post figured they had a copper-bottom story of corruption by Hunter and possibly of corruption with the Democratic presidential candidate. Hunter was caught colluding on the laptop with deep-pocketed Chinese and Ukrainian tycoons. Worse still, on the laptop, he claimed he would be giving his father — "the Big Guy" — a cut of the cash that was changing hands.

The laptop turned up in September 2020, and by October, there should have been an enormous story following up on the New York Post's reporting. But outside of the conservative media, it was a nonstory. Now the Post says, "the story was censored by social media companies at the behest of the Democratic Party. Mainstream media outlets — including the (New York) Times — attacked or ignored the Post's revelations." The Biden campaign claimed the story was part of a Russian disinformation campaign — another instance of Trump supposedly colluding with the Russians. What is more, over 50 intelligence community adepts signed a letter claiming the Post story had "the classic earmarks of a Russian disinformation operation." These intelligence community adepts really have it in for Trump. I wonder why? They are not supposed to be so partisan, are they?

Now The New York Times has published a story — 17 months after the Post published its story — that the Hunter Biden laptop exists and the evidence that the Post has published is true, without mentioning the Post by name. That is to say, the Times validated the Post's story 16 months after the Big Guy won the presidency. The Times seems to be admitting to participating in a vast cover-up. Why would it? Does it think that its readers only know what appears in The New York Times? Apparently, the news is not news until the Times says it is. Nowhere in the Times' long and tedious report of the Hunter Biden story is the Post mentioned, though the Times' story is basically using the Post's reportage.

The left wing of America recently went on for months believing the right wing of America was conspiring against Hunter Biden and his blameless dad. Possibly, Joe Biden really is blameless, though I would like to know how one becomes seriously wealthy on nothing more than a senator's salary for 36 years. As for Hunter, possibly he is as brilliant as his father insists that he is, though he badly needed a shave in the pictures that the New York Post ran of him the other day, and a bath and a fresh hair dye. What is more, lifting a line from his dad, in one picture, he needs to work on his pecs. Do you recall Joe tapping a journalist on the chest and saying, "You need to work on your pecs"? Hunter's upper body is not well tended to.

Yet enough of the Biden family. Let us end today's session on another noble note: Glory to Ukraine!