How's the Weather in China 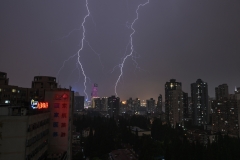 WASHINGTON -- I have good news for my readers. I come with glad tidings. November was a month of clement weather throughout these United States. Not only that, but the weather reports for December are going to be even better. I predict the weather for December is going to be absolutely balmy, even tropical in our southern climes. Put away your ugly galoshes. Pack up your earmuffs. January will be flip-flop weather. We are facing a suntan climate for months to come. We are going to have 70-degree weather probably all the way to springtime, and after that, who knows? By that time, we shall be facing the summer months. How warm can it get?
You might well ask what have I been drinking, or even worse, what have I been smoking? Well, I have neither been drinking nor smoking. I am as clean as a hound's tooth. I have been trying to see the world through the eyes of one Sam Bankman-Fried, the mesmerizer of the crypto hedge fund attached to FTX, which recently went belly-up. Sam also was a very generous donor to the Democratic Party. The last time I checked, he had only George Soros ahead of him, though that could be false information. There is a lot of false information around Sammy boy.
Sam started his fund for big bucks not on Wall Street but in Berkeley, California, where so many other dreams of making a better world have been hatched. He with a group of like-minded do-gooders gathered around a firm called Alameda in the fall of 2017. They had one thing in common, effective altruism. Their goal was to give more effective charitable donations to good causes and avoid conventional investments. According to The Wall Street Journal, the group "viewed Alameda as a way to make a lot of money trading cryptocurrencies -- profits that could be funneled to charitable causes employing" effective altruism principles.
Early on, the group splintered with some of the more conventional investors claiming Sam had lost track of his investments to the point that he did not know what funds he had available and for what purpose. Sam disputes this criticism, though it now is suspected that Sam mixed his own money with Alameda's. Apparently, Sam's critics were right, and he has filed for Chapter 11.
How long could Sam believe his fantasy world was going to continue untroubled by the authorities? Well, it seems there is a lot of fantasy in the world nowadays. We see it in the financial world, where Sam is the latest in a long line of charlatans; in the medical world, where Elizabeth Holmes practiced her arts before the authorities closed in on her; in the political world, it goes without saying, even in the world of tyrants. Recent events suggest that China's leader Xi Jinping is going to have rough seas ahead.
Until recently, things seemed to be going Xi's way. Xi presided over a twice-in-a-decade Politburo meeting where he was elected to an unprecedented third term. But for some reason, he panicked over the COVID outbreak. Does he know something about COVID that the rest of the world does not know? After all, COVID got its start in a lab in Wuhan, China. His response was to lock down the nation. That has not gone over very well with the 1.4 billion Chinese citizens. They have held demonstrations all over the country the likes of which have not been seen since the Tiananmen Square demonstration of 1989. There have even been calls for Xi to step down. The cracks in his façade came about very quickly, though writers familiar with China have been predicting it for years. It is not just unrest owing to COVID and the lockdown, but there are also ethnic divisions splintering this vast country and geographical divisions.
Toward the end of last week, Xi responded to the protests in the street by surprising a visiting European Union delegation with the claim that the demonstrations show that the dissent reflects "frustration" with the COVID lockdown. It was the first known response by China's leader to the demonstrations. Now there have been some signs of official relaxation of the lockdown. Will there be more relaxations in China's policy of COVID lockdowns?
We shall see, but I shall be particularly interested if Xi gets up one morning and proclaims the weather as balmy as I have.
Glory to Ukraine!