Economics Is All Greek to Democrats 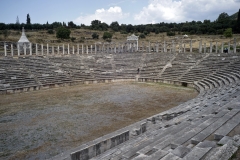 WASHINGTON -- I spent the last couple of weeks in Greece, namely Athens and Crete, cruising the Aegean waters and tasting the cuisine, which is superb, almost as superb as the ancient monuments. Frankly, the mendacity practiced on this side of the Atlantic during the recent election had become too much for me to tolerate. I needed a break from the election year's balderdash.

Thus, I departed for an area of the globe where when the inhabitants say, "It's all Greek to me," they really mean it. No one complains. Moreover, when they say their democracy is in trouble, they know what they are talking about.

Athens is the place where democracy was first tried out, and it seemed to work ... at least for the first few millennia.

However, in modern times, Greek democracy came a cropper. It began with economics, as it often does. Twenty or so years ago, the Socialist party of Greece gained power and they began to spend money like the proverbial inebriated sailor. Eventually, the conservative party returned to power, promising a return to the good old days of balanced budgets, or at least relatively balanced budgets.

Both parties competed with each other in giving the country away, and in no time, Greece was Europe's basket case.

After a couple of weeks of splendid meals and tourism to exquisite temples and other monuments from times gone by, I returned to America. There I found -- to my surprise -- America was reelecting a goodly number of drunken sailors.

Most of the electorate in the last election complained that inflation was their greatest fear. When sleepy Joe Biden brags about the money he has been spending, he is bragging about the inflation he has been causing.

The whole country did not go wild while I was away. The citizens of Florida were exemplary in statewide elections. So, too, were the citizens of Georgia, of Ohio, of North Carolina. In fact, the electorate of much of the Midwest, the South and the Cowboy West were splendid.

But the spendthrifts of California, of much of New York, of many of the coastal states performed like modern-day Greeks. Imagine appropriating a trillion dollars for mostly boondoggles under the rubric the "Inflation Reduction Act." What would Orwell say?

Our problem is not simply our politics. It is our culture. Before a country commits political suicide, it commits cultural suicide, or at least cultural foolishness.

The electorate of California, New York and a few other states got distracted by Donald Trump, abortion and other ephemeral matters. The majority of the electorate were focused on the right problem, but a sizable number of them lost their focus when it became time to vote.