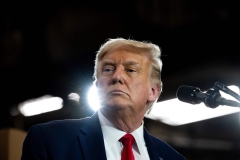 Washington — I read a front-page report in the Good Times about the recent doings of former President Donald J. Trump. It got me to thinking about when I first met him. The Good Times, incidentally, is also known as the Washington Times, which prints all the news that is fit to print, in a timely fashion, leaving nothing out, having its stories fact-checked by nonalcoholics, including a happy ending if warranted. The Good Times is often antithetical to The New York Times, but I assume you know that.

As I say, the piece in the Good Times got me to thinking about when I first met Trump in 2013. It was at our annual Washington Club Gala. He was there to receive the T. Boone Pickens Award for Entrepreneurship. I and many of the attendees that night were astonished by how gregarious Donald was, his natural charm and sense of humor and his enormous energy — a trait all great politicians have, but at the time, Donald was no politician — and something more. When he got up to accept his award, he spoke briefly, but on matters that resonated with our conservative audience. One thing more: He stayed the entire evening. I was informed that he had another engagement later in the evening, but for us, he stayed the course. He obviously enjoyed the company that evening, but upon reflection, I think something else attracted his attention.

That night, our featured speaker for the Washington Club Gala was Sen. Ted Cruz, who just happened to be the front-runner for a growing field of Republican presidential hopefuls. Looking back on the evening, I got the idea that Trump was taking Cruz's measure. If he thought he could beat him, he thought he could beat any Republican who might enter the race, and ultimately any Democrat who might face him — even the woman Bill Clinton called the "most qualified person to run for office in my lifetime," namely Hillary.

A few weeks later, when I was in New York, I stopped by Donald's office to thank him for attending our dinner. I told him I thought his remarks that evening were perfectly tailored for the dinner. We chatted some more, and I told him that he ought to think about running for president. When I started to leave, he confirmed what I had already suspected. He was going to run in 2016, and he thought his Democratic opposition would come from Hillary. A couple of weeks later, I wrote my first of six columns proclaiming his availability and eventually his victory. Donald was a natural candidate.

Of course, now we know that the intelligence community was dead set against Trump from the start. So was the Democratic Party. So was Hillary. One would expect the Democratic Party to oppose Trump, but why were the FBI, the CIA, and the Justice Department against him? James Comey, John Brennan, and James Clapper were supposed to be neutral. Brennan spoke of Trump as though his actions were "traitorous." People at the FBI were caught on tape saying things like Trump was "a f***ing idiot." Their vulgarity was so commonplace that one suspects it was uttered all the time and by a far wider circle of agents than were caught on tape. Why would they talk like this? What provoked their rage?

Well, on Thursday, March 24, Trump filed a lawsuit against Hillary Clinton, former FBI Director James Comey, and more than two dozen others for forcing him to defend himself against their false charges when he should have been carrying out the duties of a president. The case argues in part that, "Acting in concert, the defendants maliciously conspired to weave a false narrative that their Republican opponent, Donald J. Trump, was colluding with a hostile foreign sovereignty." And the lawsuit continues, "The actions taken in furtherance of their scheme — falsifying evidence, deceiving law enforcement, and exploiting access to highly sensitive data sources — are so outrageous, subversive, and incendiary that even the events of Watergate pale in comparison."

So now maybe we shall see what made the intelligence agencies so terrified by Donald Trump. And one thing more: Glory to Ukraine!