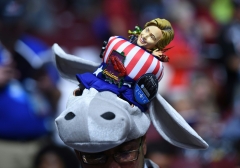 Washington — Do you remember the days when our liberal friends were forever claiming the moral high ground on almost any issue no matter how devoid of moral content the issue might be?

They claimed it, of course, on issues of war and peace. "All we are saying is give peace a chance," the chorus would sing out. Yet they even claimed the moral high ground in the controversy about tobacco, though I do not recall what they sang. Possibly it would be something denouncing Winston Churchill as a colonialist or an empire-builder. I recall with great clarity their insistence that it was immoral for women to wear fur coats. Though, again, I do not recall their song to furbearing animals or even animals in general. It was probably a real tearjerker. Perhaps it was something about a furry little creature in its mother's womb.

Now, of course, the liberals and the left in general have a new enthusiasm: abortion. There will not be any songs about cute little fetuses in their mothers' wombs on this issue. The liberals were not always the party favoring abortion, just as the liberals were not always the party of transgenderism or cancel culture, but they are today, and you better fall in. Apparently, the Supreme Court is not falling in. According to a leaked document written by Justice Samuel Alito, the court is close to sending abortion back to its original jurisdiction, where it was 49 years ago. It will be an issue for the states to decide. If I am right, the Supreme Court is getting out of the business of judging when life begins, and it is sending the matter back to the states. The great debate that is tearing this country apart will be over, at least on the federal level. What a relief!

But the great uproar about Roe v. Wade demonstrates how difficult it is to be a member of the American left nowadays. In days gone by, you could be on the left and fully support abortion. Then again, you could be on the left and not fully support abortion. You might be opposed to abortion but fully supportive of civil rights or of pacifism. Certainly, one can imagine anti-abortion black people supporting civil rights and pacifism over the years. Today, you are first and foremost pro-abortion or you do not exist in the eyes of the left.

President Joe Biden was not always pro-abortion. There was a day when he took the Roman Catholic Church's position on abortion seriously and opposed abortion. But as the years have gone by, he has grown lax. Now he not only gives abortion a blind eye, but he ignores the destruction of Roman Catholic Churches. For that matter, so did the whole hierarchy of the Democratic Party in early May. Thugs turned their maniacal wrath on Catholic edifices and, who knows, probably on fundamentalist churches, too, and the Democratic leadership said nothing and did nothing. Heretofore, the Democratic rank and file was pretty much made up of Catholics. My Democratic friends, that is no way to treat your electorate, as we shall see in the elections this fall.

This rampaging through churches — sometimes when mass is being held — comes at a time when the Democrats are in high dudgeon about the uprising of Jan. 6, 2021, in Washington by pro-Trump partisans. Supposedly the demonstrators were in such riotous form that the Democrats are calling their behavior insurrectionary. Well, what do you call the behavior of those who take spray cans to church altars and have to be fenced out of the Supreme Court?

Luckily, the good sense of the Supreme Court is going to prevail. If, as I assume it will, the court returns the matter of abortion to the states to deal with, abortion is one more vexed issue that the states are better equipped to handle than the federal government. Much like young people's education and health care, the matter is best handled at the state level. Once again, the Founding Fathers perceived the needs of the 21st century better than those living in its air-conditioned comforts and its Internet connectedness. We live at a time when the wisdom of the 18th century is called upon once again to come to the aid of the feverish present.

And I end this column once again with Glory to Ukraine!