Are Guns the Problem or a Culture of Violence? 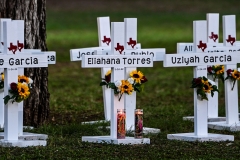 Crosses adorn a makeshift memorial for the shooting victims at Robb Elementary School in Uvalde, Tex., on May 26, 2022. (Photo credit: CHANDAN KHANN/AAFP via Getty Images)

WASHINGTON — Once again, it has happened in plain daylight. A mentally sick barbarian laid his paws on military-grade instruments of war, and he went to war against innocent people. Recently, it was black people because they were black, I assume. This time, it was children because they were children or defenseless or they had parents who drove them to school. Who knows? Doubtless, there have been lesser casualties that have taken place between the Buffalo, New York, atrocity and the Uvalde, Texas, tragedy.

We are told that we are to await word on the Uvalde barbarian's motive, as though a plausible motive will lend sense to this evil act. It will not. Under any circumstances. the act committed in Uvalde was, at least, an evil act, vouchsafed by the devil himself. Let Salvador Ramos roast in hell.

Now we are told that the parents of the soon-to-be slaughtered young people wanted to barge in on the room in which their children and two teachers were about to be slaughtered, but the authorities in charge would not allow it. The so-called authorities — people from law-enforcement agencies and presumably school officials — barred the enraged parents from charging the room in which their children were being held. Did you see the armed officers holding back the desperate parents? I did. It was shocking.

It reminded me of less desperate but nonetheless similar examples of the school "authorities" rejecting the protests of parents. Parents opposed the treatment of their children by "authorities" obsessed with sex education, transgender obscurantism, anger management, public health diktats, and who knows what other elements of progressive education that have now preempted reading, writing, and arithmetic in our public schools.

By now, most attentive Americans recognize the familiar stages that remain to be played out in this scenario. There will be the declarations of outrage by those who govern us. Then the declarations of contumely toward anyone who dissents from the received wisdom, particularly the received wisdom about gun control. The fact that there are already some 400 million guns out there will present the gun control lobby with no problem at all. Some legislation will be passed, of course. Then we will pass on to the next example of...of what?

Possibly some people are going, in light of these shocking events, to conclude that America is confronted with something far more serious even than gun violence. They are right. We are confronted with living in a violent culture. No one ever mentions it, but we are. I seldom watch television. I watch the evening news, and that is about all. But even in watching the evening news, I see trailers for astoundingly coarse shows that are thought to be entertainments. Recently, I saw a man put a revolver to another man's head. After that, I lost interest. Who knows what happened? I saw monstrous vehicles running down pedestrians; I guess they were pedestrians. I saw monstrous monsters. The world of Televisionland is inhabited by the monstrous and the fanciful.

It is hard to believe that ordinary Americans come home from work, turn on the television, and sink in with an evening of mayhem and madness, but apparently, they do. No wonder so many people have so much trouble sleeping. Then there is the rock music, the talk shows, the game shows, and the weather reports. No, I am only joking about the weather reports, but I have no doubts that the day will come when inclement weather will be reported with genuine thunder, pouring rain, lightning across the screen, and tornados on a particularly blusterous day.

Who is going to take on the entertainment industry? Who is going to challenge Walt Disney's ghost? As things stand right now, the gun control crowd has no chance of controlling guns and less of a chance in taming our culture of violence. As I say, there is no organized group even thinking about our violent culture: no Mothers Against Prime-Time Television, no Mothers Against Violent Video Games, not even a lone Ralph Nader to harangue the entertainment industry.

These solitary gunmen are the symptom of something far more pervasive than gun violence. The bearers of our culture — you and me and the loudmouthed politicians now denouncing guns — have got to rid our culture of coarseness and violence. It will not happen.