The 12 Judas Iscariots in the Senate 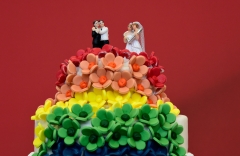 When Bill Clinton looks like a devout Sunday School teacher, that’s your first clue that the culture has embraced sexual anarchy!

Back on September 21, 1996, Slick Willy actually signed into law the Defense of Marriage Act. It banned federal recognition of homosexual faux marriage by limiting the definition of marriage to the union of one man and one woman. It further allowed states the right to refuse to recognize homosexual marriages granted under the laws of other states.

Tragically enough, since then, the Democrat Party’s platform has become a virtual Manifesto of Evil, championing today’s twin sins of baby-killing by abortion and sexual perversion.  If Joe Biden dared to take a similar stand today, he would be put on the first train back to an assisted living home in his beloved hometown of Wilmington, Delaware.

After the fall of Roe v. Wade on June 24, 2022, The Hill reported that Justice Clarence Thomas, a conservative, suggested the high court revisit its 2015 Obergefell homosexual faux marriage ruling, which he and fellow conservative Supreme Court Justice Samuel Alito have claimed has had “ruinous consequences for religious liberty.”

Also known as House Resolution 8404, this terrible law will allow individuals to sue Christian business owners who refuse to participate in promoting homosexual faux wedding related messages and threaten the tax-exempt status of religious nonprofits that do not recognize homosexual faux marriages.

The bill will disproportionately harm believing Christians, such as Christian baker Jack Phillips and Christian florist Barronelle Stutzman, whose religion will not allow them to participate in homosexual nuptials.

Plus, it will jeopardize the ability of Christian adoption agencies that do not place children with “married” homosexual couples.

The 12 traitors in the Senate

No wonder Family Research Council President Tony Perkins said on December 8th, “Today is a dark day for religious freedom. The Left’s forces of religious hostility, aided by 12 Republican senators and 39 Republican representatives, advanced what history may ultimately record as one of the greatest assaults on religious freedom in modern history.”

Tolerance has been redefined

Perhaps most bizarrely, Senator Lummis of Wyoming, a self-professed “conservative Christian,” defended her vote by claiming it was her demonstration of tolerance, reported LifeSiteNews.com.

I beg your pardon?

Tolerance means that two people, with opposing views, respect the other’s right to hold differing views.  Or at least it used to.  Today, the politically correct connotation of tolerance, from a Leftist worldview, is a conservative’s obligation to celebrate a liberal’s God-hating behavior.

And if I don’t celebrate the exalted sin of the day, I will become the victim of the Cancel Culture.  Big Tech will de-platform me or my employer will fire me. So much for the original notion of tolerance.

Furthermore, Senator Lummis foolishly asserted that the very “survival” of America was somehow dependent upon conservatives caving like a house of cards.

After the Senate rejected a series of religious liberty amendments, the “Benedict Arnold” Republicans named above sided with Senate Democrats in the 61-36 vote for final passage.  More shockingly, two of its supporters, Republican Senators Roy Blunt of Missouri and Joni Ernst of Iowa had served as co-chairs of the congressional Values Action Team, “dedicated to advancing pro-life and pro-family policies,” reported the Washington Stand.

Republican Senator Mike Lee of Utah put forward a comprehensive religious liberty amendment protecting religious believers from vindictive federal officials who might take “discriminatory action … wholly or partially on the basis of their belief in marriage.”  Regrettably, Lee’s amendment failed by one vote, 48-49. His amendment received bipartisan support, with Democrat Senator Joe Manchin of West Virginia voting yes. But one Republican, Senator Susan Collins of Maine, voted against Lee’s amendment. And two Republican senators, Ben Sasse of Nebraska and Pat Toomey of Pennsylvania, had the audacity to skip the vote, neither of whom is running for re-election.

Peter LaBarbera of Americans for Truth about Homosexuality, tweeted , “While conservatives were chasing the shiny ball of trans extremism, LGBTQ activists worked with Useful Idiot Republicans (& churches and Mormons) to pass a law enshrining the radical concept of homosexual ‘marriage’ in federal law.”

Why did 12 Republican senators vote against God-ordained marriage?

Despite the fact that 412,336 concerned citizens sent emails to their two Senators through the Family Research Council website, the same 12 Republican senators were unmoved by the cry of their constituents.  Through a series of votes, they repeatedly embraced the sexually perverse bill with a white-knuckled grip.

Why did these 12 Republicans betray the conservative Christians who elected them with a Judas-style kiss on the cheek?  Follow the money.

According to the New York Times, “Behind the scenes, a group of influential Republican donors and operatives, including some of the party’s most prominent gay leaders with long experience prodding their party to embrace L.G.B.T.Q. rights, banded together with the bill’s proponents in Congress for a coordinated, $1.7 million campaign to persuade G.O.P. senators that backing it would give them a political edge.

“Their quiet work helps explain how a bill to ensure recognition of same-sex marriages across the country went from being the subject of an election-season political maneuver that few expected to be enacted to an initiative embraced by a decisive majority of senators, and an unexpected victory for the gay rights movement that will be one of the final acts of the Democratic-controlled Congress.”

Now that these reprobates have championed Leviticus 18:22, I don’t doubt that they will ultimately advocate every sexual perversion listed in Leviticus 18 as right, good, and even noble.

On December 13th, President Joe Biden, signed the bill into law, reports LifeSiteNews.com. Plus, from the lawn of the White House, he attempted to wrap the American flag around immoral behavior which God has called an abomination. (Watch this ABC video of the event)

He said, “Today’s a good day!  A day America takes a vital step toward equality, toward liberty and justice — not just for some, but for everyone — toward creating a nation where decency, dignity, and love are recognized, honored, and protected.  Today, I signed the ‘Respect for Marriage Act’ into law.  Deciding whether to marry, who to marry is one of the most profound decisions a person can make.”

But perhaps there is a silver lining in the cultural cloud of these pro-homosexual pronouncements.

Lorie Smith, the Christian owner of 303 Creative, a Denver, Colorado website design company, refused to create websites for homosexual faux weddings.  Unfortunately, Colorado’s law will force Lorie to use her artistic web design skills to speak messages celebrating homosexual faux weddings if she speaks messages celebrating marriage between one man and one woman. But on top of that, the law acts as a gag order that prevents Lorie from expressing on her website the reasons why she only creates websites celebrating certain ideas.

This is censorship! And it’s a violation of Lorie’s First Amendment rights. (Watch a 5-minute video about Lorie Smith’s story.)

Represented by Alliance Defending Freedom attorneys since 2016, her attorney, Kristen Waggoner, just argued her case before the Supreme Court on December 5, 2022.  According to a RedState.com article entitled “Justice Gorsuch Leaves CO Solicitor General Stammering During Oral Arguments on Religious Liberty,” it looks as though the justices are likely to rule in Lorie’s favor by June 2023.

And perhaps that ruling might somehow torpedo this outrageous Disrespect for Marriage Act.  We can only hope.

This commentary is an abbreviated and edited version of the piece originally posted in Time for Courage.