The West's Fear That Dare Not Speak Its Name 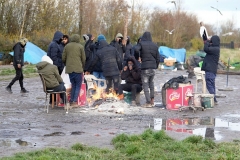 Migrants try to warm up around an improvised fire in the "BMX Camp" in Calais on December 01, 2021 in Calais, France. (Photo by Sylvain Lefevre/Getty Images)

With the drowning deaths of 27 migrants crossing the Channel from France to England, illegal migration from the Third World is front and center anew in European politics.

Prime Minister Boris Johnson has proposed that France take back to its shores all migrants who cross the Channel illegally and come ashore in Britain.

In the run-up to French elections this April, a startling development suggests that resistance to illegal migration is spreading and the idea of dealing with it resolutely and unapologetically is taking root.

Marine Le Pen, president of the rightist National Rally, formerly the National Front, who is expected to reach the finals for president of France against Emmanuel Macron, is suddenly being challenged.

The rising star on the right is Eric Zemmour, who, writes The New York Times, "became one of France's best-selling authors in the past decade by writing books on the nation's decline — fueled, he said, by the loss of traditional French and Christian values, the immigration of Muslim Africans bent on a reverse colonization of France, the rise of feminism and the loss of virility, and a 'great replacement' of white people."

Zemmour is being called "the Donald Trump of France." And he and Le Pen are now running third and second behind Macron in the polling to become the next president of France, which suggests the power of the issue on which they agree: uninvited and unwelcome Third-World migration.

"You feel like a foreigner in your own country," said Zemmour in his announcement speech Tuesday, declaiming, "We will not be replaced."

Neighboring Spain is gripped by the same concern. Refugees and migrants from the global south use Morocco as a base from which to breach the Spanish enclaves of Ceuta and Melilla on the African coast.

Spain has taken to pushing the intruders back into Morocco.

Madrid has accused Rabat of using the migrants as a diplomatic weapon to extort changes in Spanish policy.

Italy, whose native-born ethnic population has been in a steady decline, patrols the Mediterranean Sea to prevent migrants from Libya from reaching its shores. Drowning deaths are not uncommon. The Channel and the Mediterranean Sea are more formidable and unforgiving waters to cross than the Rio Grande.

Greece is attempting to keep Turkey from moving refugees and migrants from Middle East wars onto the Greek islands off Turkey's coast.

Half a decade ago, Turkey was bought off with billions of euros to prevent the millions of Arab and Muslim refugees within its borders from crossing over into the EU.

In the recent clash between Poland and Belarus, the weapon of choice for Alexander Lukashenko was — migrants.

Brought into Belarus from the Mideast, they were moved to the Polish border, forcing Warsaw to deploy troops to keep thousands out of Poland. Lukashenko was exploiting the migrants to punish Poland and the EU for supporting sanctions on his regime.

After Europe united against him, Lukashenko moved the migrants away from the border and sent many back to Syria and countries whence they came.

In the hierarchy of European fears, the perceived threat to national identities that comes with mass migrations from the failed and failing states of the Third World appears to rank as a greater concern than the prospect of a Russian army driving toward the Rhine.

Most European nations have a birth rate below what is needed to replace their native-born ethnic populations. And as the founding peoples of these nations pass on, they are being replaced by peoples from what were once colonies that the old European empires controlled.

Most of these European nations have not had the experience with mass immigration the Americans have — from the Irish migration of 1845-1849 to the millions from Central and Eastern Europe between 1890 and 1924.

Yet even the Americans had never known a migration of the magnitude of the one that began in 1965 and continues today, legal and illegal, a migration that has altered irreversibly the ethnic composition of the country of Ike and JFK.

In President Joe Biden's first year, over a million illegals breached the U.S. southern border along with hundreds of thousands of "got-aways" who made it into our country without any contact with border authority.

The rising resistance to illegal immigration in Europe is being denounced by Euro-elites as xenophobia and racism, and the proscribed term used to define it is the one the Times associates with Zemmour.

What is "The Great Replacement"? A hostile critic defines it thus:

"The Great Replacement Theory is an ethno-nationalist theory warning that an indigenous European — e.g., white — population is being replaced by non-European immigrants.

The English translation of Camus' book is entitled, "You Will Not Replace Us!" Growing numbers of Western peoples appear to fear exactly what it is that Zemmour and Camus say they fear.