Is Taiwan's Independence Worth War? 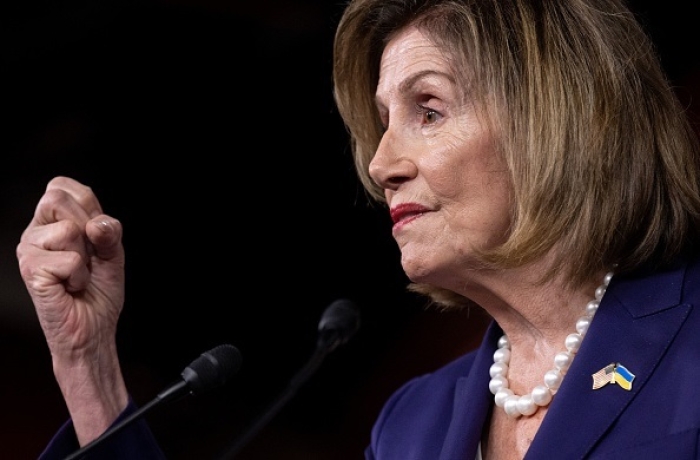 Speaker of the House Nancy Pelosi (D-Calif.) at her July 29, 2022 press conference. (Photo by SAUL LOEB/AFP via Getty Images)

When a man knows he is about to be hanged in a fortnight, it concentrates his mind wonderfully, said Dr. Samuel Johnson.

If there is any benefit to be realized from the collision between China and the U.S. over Speaker Nancy Pelosi's proposed trip to Taiwan, it is this: America needs to reflect long and hard upon what it is we will fight China to defend in the Taiwan Strait and South China Sea.

China, after all, is a nuclear-weapons nation with a manufacturing base larger than our own, an economy equal to our own, a population four times ours and fleets of warships larger in number than the U.S. Navy.

An air-naval-and-missile war in the Western Pacific and East Asia would be no cakewalk.

A massive barrage of anti-ship and hypersonic missiles launched by China could cripple and conceivably sink the U.S. carrier Ronald Reagan now in the South China Sea. The Reagan carries a crew of thousands of sailors almost as numerous as the U.S. casualty lists from both Pearl Harbor and 9/11, the worst attacks in and on the U.S. outside of such Civil War battles as Gettysburg and Antietam.

What in East Asia or the Western Pacific would justify such losses?

What would justify such risks?

Since President Richard Nixon's trip to China, and President Jimmy Carter's abrogation of the mutual defense treaty with the Republic of China on Taiwan in 1979, the U.S. is not obligated to come to the defense of Taiwan against China, which claims that island the size of Maryland as "part of China."

Our military posture has been one of "strategic ambiguity." We will not commit to go to war to defend Taiwan, nor will we take the war option off the table if Taiwan is attacked.

But if the U.S. went to war to defend Taiwan, what would it mean?

We would be risking our own security and possible survival to prevent from being imposed on the island of Taiwan the same regime lately imposed on Hong Kong without any U.S. military resistance.

If Hong Kong, a city of 7 million, can be transferred to the custody and control of Beijing without resistance from the U.S., why should it be worth a major U.S. war with China to prevent that same fate and future from befalling 23 million Taiwanese?

Allow China to take Taiwan without U.S. resistance, and our treaties to fight for the sovereignty, independence and territorial integrity of Japan, South Korea, the Philippines, Australia and New Zealand become suspect.

Belief in the U.S. commitment to fight for the nations of East Asia and the Western Pacific would dissipate. The entire architecture of Asian defense against Communist China could disintegrate and collapse.

If we allowed Taiwan to be taken by China without intervening, it is argued, the value of U.S. commitments to fight to defend scores of allies in Europe and Asia would visibly depreciate. U.S. credibility would suffer a blow as substantial as the loss of South Vietnam in 1975.

The fall of Saigon was followed by the loss of Laos and Cambodia to communism, the overthrow of the shah, the Iranian hostage crisis, the Soviet invasion of Afghanistan, the strategic transfer of Ethiopia, Angola, Mozambique, Nicaragua and Grenada to the Soviet bloc, and the rise of Euro-communism on the Old Continent.

Pelosi's prospective visit to Taiwan, and the bellicose reaction of Beijing, should raise other relevant questions.

If this should lead to a U.S.-China war, what would we be fighting for? And what would victory look like?

A restoration of the status quo ante? Permanent independence for Taiwan, which would require a new and permanent war guarantee by the U.S. and a new U.S.-Taiwan defense pact?

Would a permanent commitment to fight to defend Taiwan from China be acceptable to an American people weary of commitments and wars?

And after our victory in the Taiwan Strait, how would we secure indefinitely the independence of that nation of 23 million from a defeated power of 1.4 billion, bitter and bristling at its loss?

Consider: China, in this 21st century, has grown massively, both militarily and economically, and in both real and relative terms, at the expense of the United States.

Nor are the growth trends for China, with four times as many people as there are Americans, favorable to the USA.

What guarantees are there that 2025 or 2030 will not bring a more favorable balance of power for China in what is, after all, their continent, not ours?

Unlike in the Cold War, time is not necessarily on the side of the United States and its allies when all three of the nuclear powers in East Asia — China, Russia, North Korea — are hostile to the USA.