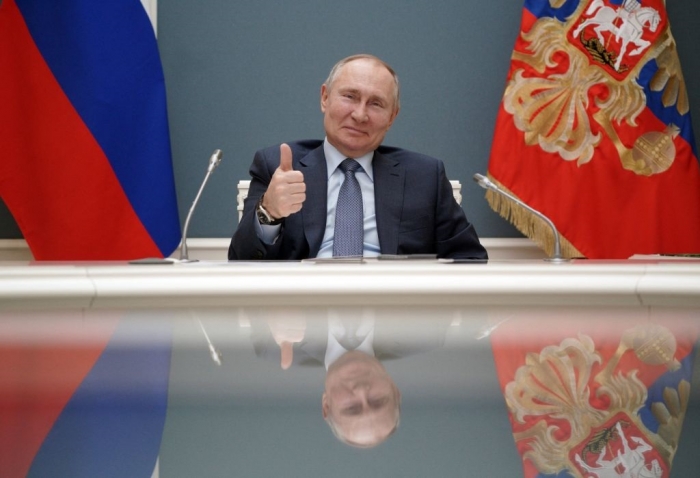 Russian President Vladimir Putin has made a veiled nuclear threat while launching his invasion of Ukraine. (Photo by ALEXEY DRUZHININ/SPUTNIK/AFP via Getty Images)

From his principal avenues of attack on Ukraine, Russian President Vladimir Putin began this war with three strategic goals.

Send an army south from Belarus to capture Ukraine's capital, Kyiv, and replace the government. Send forces into northeast Ukraine to capture its second largest city, Kharkiv, with 1.4 million people.

Third, extend the Donetsk enclave westward to establish a land bridge to Crimea and give Russia full control of the Sea of Azov and most of the Ukrainian coast along the Black Sea.

This last objective is almost achieved. Yet, as of Monday evening, five days into the war, neither Kyiv nor Kharkiv had fallen, though Russia had committed most of the troops it had assembled for the invasion.

Putin needs to get this war over with, for time is not on his side or Russia's side.

In a week, he has become a universally condemned and isolated figure, and his country has been made the target of sanctions by almost the entire West. He is being depicted as an aggressor, even a war criminal, who is brutalizing a smaller neighbor, which, in its fierce and brave resistance, has taken on the aspect of a heroic nation.

The world is rallying to Ukraine.

In the UN Security Council, which Russia chairs, only Russia voted to veto a resolution denouncing it for aggression. India, China and the United Arab Emirates abstained.

As for Ukrainian President Volodymyr Zelensky, his defiance of demands for surrender is being portrayed as Churchillian.

Europeans and Americans have promised more Javelin missiles to destroy Russian tanks and armor, and Stinger anti-aircraft missiles of the type that took a heavy toll of Russian helicopters in the Afghan war of the 1980s.

NATO is uniting. Germany has voted to raise its defense budget and send its own anti-tank weapons and Stingers to Ukraine.

Economic sanctions imposed on Russia have crashed the ruble, caused a collapse of the stock market and severely restricted Moscow's capacity to manage its debt.

Russian army units in Ukraine may be sufficient to occupy Kharkiv and Kyiv, but that army is insufficient to control and run a country the size of Texas with a population of 44 million people.

The Russians would have to find thousands of collaborators to help run the country. Where would Putin find them among a people that so widely detests him today?

The longer this war goes on, the greater the certainty that it bleeds the invading army to levels intolerable to Mother Russia, which is what eventually happened in Afghanistan in the 1980s.

If this war does not end soon, Putin is likely to lose it and fail in his goal of pulling Ukraine out of the Western camp and back into the orbit of Mother Russia.

As his motivation is to hold power and use it to carve a niche in history alongside the greatest Russian rulers of the past who enlarged the nation or empire, Putin is probably not going to accept defeat and go quietly.

Nor was it a sign of resignation that Putin, on Sunday, ordered Russia's nuclear forces to high alert because, "Top officials in leading NATO countries have allowed themselves to make aggressive comments about our country."

This is not the first time Putin has introduced the idea of using a nuclear weapon. On Feb. 19, days before the invasion began, Putin ordered drills of nuclear-capable ballistic and cruise missiles, bombers and warships.

In his speech announcing the military operation in Ukraine, Putin warned that countries that interfere with Russia's actions will face "consequences you have never seen."

Would Putin exercise what has been called the "Samson Option" - pulling down the pillars of the temple and taking your enemies with you?

What Putin is suggesting is that in the last analysis, if military defeat beckons for Russia, and his own dispossession of power and political if not actual death are to follow, he may use the ultimate weapon in Russia's arsenal to prevent it.

Avoid a widening of the war by preventing any escalation to nuclear weapons. Secure the independence of Ukraine. Effect the removal of Russian troops from Ukrainian territory.

If this requires that Ukraine give up any ambition to become a NATO nation, Putin's declared purpose in launching the war, so be it. We might have avoided this war had we done so before it was begun.

This is not where we appear to be headed.

Finland, and Sweden, it is now being said, should be invited into NATO. Were that to happen, the U.S. would be obligated to help defend the 830-mile Finnish border with Russia.

This would be an act of hubris of the kind that has led to great wars.