How, When, Do We Come Together Again? 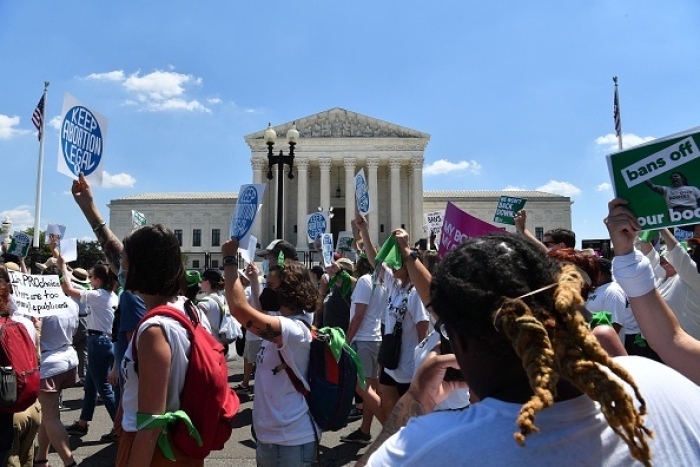 Abortion rights activists rally outside the US Supreme Court after the overturning of Roe Vs. Wade on June 30, 2022. (Photo by NICHOLAS KAMM/AFP via Getty Images)

When 30 FBI agents showed up at Mar-a-Lago to cart off boxes of documents, it was an authorized, legitimate and justified procedure to retrieve national security secrets being illegally kept there.

Or it was an unprecedented regime raid on the home and office of the foremost political rival of President Joe Biden that called to mind a "Third World country," the East German "Stasi," the KGB or the Gestapo.

That was a riot, a disgraceful breach of the Capitol, involving assaults on Capitol cops that deserved to be and are being punished.

No, it was more than that. Far more. It was an "insurrection," a "fascist coup," an act of treason led by far-right extremists to abort the transfer of power from the winner of the election of 2020 to the loser. It ranks right up there with the 1814 burning of the Capitol by the British.

Such is the magnitude of the divide in America, a divide that extends far beyond our clashing views of Jan. 6 and the Mar-a-Lago raid.

Consider abortion. Before the 1960s, abortion was almost universally regarded as a shameful and criminal act. Doctors who performed abortions were disgraced and sometimes sent to prison.

But after the Dobbs decision by the Supreme Court declared that Roe v. Wade in 1973 was wrongly decided, restoration of women's right to an abortion is being championed by half the nation.

The other half of America yet believes abortion involves the killing of an unborn innocent child.

Part of America celebrates the Supreme Court's decision to declare marriage equality for homosexuals. Yet, a traditionalist minority believes such a mandate imposes on the nation a secularist morality contradicted by the tenets of the Christian faith that was the basis of laws for our first two centuries as a nation.

Nor is it only clashing morality that divides us.

For a nation, a country, a people, a democracy to endure, there needs be a broad consensus of belief, culture, custom and politics.

On the issue of law and order, without which a republic cannot stand, there is now disagreement over the role and conduct of our police.

During the George Floyd summer of 2020, "Defund the Police!" was the clamor of the left, and among the street chants of Black Lives Matter was, "Pigs in a Blanket, Fry 'Em Like Bacon."

Only a stunning political recoil caused its abandonment.

For a nation, especially a great world power like the United States, some things are indispensable to its preservation.

A democratic republic needs to preserve the value of its currency, to defend its borders against illegal mass migrations and invasions, to preserve law and order, especially in its great cities.

Which of these requisites exist today when the nation suffers 8% inflation; 250,000 illegal aliens cross our southern border every month; and "mass shootings" occur daily in our cities during which at least four victims are gunned down, wounded or killed?

The preservation of a democracy also requires the confidence of its people in its defining institutions.

Yet, since the Reagan era, Americans' collective confidence in our major institutions has fallen from one-half of the nation to one-fourth.

One in 6 Americans had great confidence in our newspapers, with only 1 in 9 citizens saying the same about television news.

In summary, we are a country whose people have a diminishing confidence in almost all of its institutions, from big business to the churches, universities and media. Only small business and the U.S. military enjoy the confidence of the American people.

Public approval of Biden's performance is at the lowest level ever recorded for a president at this point in his first term.

True, we have been through and recovered from divisive times.

In the 1860s, 11 of the 33 states seceded and fought for four years to gain their independence of the Union.

The 1960s were divisive, but the left, with Sen. George McGovern its political expression, captured less than 40% of the vote against Richard Nixon in 1972. Ronald Reagan ran up two landslides in the 1980s.

Those days are long gone.

The left today dominates the academic community and culture to a greater degree than it once did and is further removed from the heart of the country in Middle America than it has ever been.

When, how, does America ever unite again? And what unites us, other than an external attack on the country, like Pearl Harbor or 9/11?

Where is the common ground on which to stand?

Does such ground even exist, given the divisions in religion, race and ethnicity, and the seemingly irreconcilable disagreements over morality, ideology, culture and politics?

Has the great experiment run its course?