The Emerging Existential Crisis at the Border 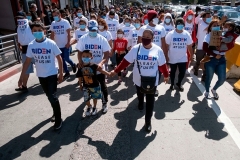 Foreigners wear "Biden, please let us in" T-shirts on their way to the Southwest border in Tijuana, Mexico on March 2, 2021. (Photo by GUILLERMO ARIAS/AFP via Getty Images)

During a Democratic debate in 2020, the candidates were asked if their health care plans would cover "undocumented immigrants."

Each raised his or her hand, including front-runner Joe Biden.

From that stage, the message went forth: If the Democrats win this election, then it is amnesty for all and open borders in America.

The message was reinforced by repeated Democratic praise for sanctuary cities, by calls to "abolish ICE" and end deportations, by pledges to stop work on Donald Trump's wall, if not to tear it down.

Message sent to Mexico, Central America and the Third World:

If the Democrats win and you make it across the border into the United States, under President Joe Biden, you will not be sent back. After only a brief hassle, the economic opportunities and social welfare benefits of the richest country on earth will be open to you and yours.

Hence, when Biden won, a new and potentially historic surge to the Southern border began, and the number of illegal arrivals and crossings are in the growing thousands every day.

In February, some 100,000 immigrants were apprehended by the Border Patrol for illegal border crossing. "I actually think that's an undercount," says Victor Manjarrez Jr., ex-Border Patrol agent who teaches at Texas University.

Children and families who cross illegally from Mexico cannot now be held for more than 72 hours. They are being released into the U.S. to await a court date — potentially years off — to hear their claim to a right to be here. Most never show up.

"We are weeks, maybe even days, away from a crisis on the southern border," says Rep. Henry Cuellar, a Democrat whose Texas district abuts Mexico. "Our country is currently unprepared to handle a surge in migrants in the middle of the pandemic."

Congressional Democrats, following Biden's lead, have proposed a new citizenship act. "Dreamers," brought here by their parents as children, would be put on a three-year fast-track to U.S. citizenship.

The 11 million to 22 million illegal migrants already in the country — the exact number is unknown — would be put on an eight-year track to citizenship.

The Democratic Party is signing on to the largest mass amnesty for illegal immigrants in history — which would produce millions of new voters for the party.

Among the recent border-crossers, who are transported by bus to detention centers, where they remain for 72 hours and then are released to travel where they wish, many are carrying the coronavirus.

Thus, what's shaping up on the border is not only a national security crisis but a national survival crisis. For it is impossible to see, given the Biden administration policies adopted, how the invasion of America can be halted. And if 2 million or 3 million migrants reach the U.S. border and cross over each year, and we do not send them back, what stops the invasion and remaking America?

What would blanket amnesty and a renewed invasion portend?

In a decade, Texas, the Southwest and much of the South would take on the political aspect of California where the GOP has become a permanent minority party.

As many illegal migrants do not read, write or speak English, and do not bring a unique set of skills, their immense and growing presence can only deepen our national disunity.

Almost all of these folks are poor or working-class people who would have to rely on government subsidies for their health care, food support, housing and the schooling of their children.

With the unemployment rate rising again in the Black community, which has sustained the heaviest collective hit from the pandemic and economic collapse, the migrants would be competing with them for jobs.

And as the illegal migrants are disproportionately young and male, they would add to the surging crime rates in America's major cities.

America is headed, seemingly inexorably, to a future where a majority in this country traces its ancestry to Asia, Africa and Latin America, a future where this already fractionated nation is even more multiracial, multiethnic, multilingual and multicultural than today.

With racial conflict as sharp as it has been in decades, with our political parties at swords point, with the culture war raging unabated, as mobs tears down statues and monuments to America's founders, exactly what national problem will be solved by an unstopping and unrelenting wave of migrants illegally crossing the border into our country year after year?

One wonders: Is this how the Republic ends?