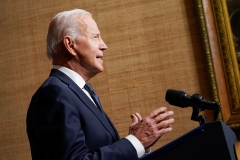 President Joe Biden speaks from the Treaty Room in the White House on April 14, 2021 in Washington, D.C. about the withdrawal of the remainder of U.S. troops from Afghanistan. (Photo credit: ANDREW HARNIK/POOL/AFP via Getty Images)

"It is time to end the forever war."

So said President Joe Biden in his announcement that, as of Sept. 11, the 20th anniversary of the attacks on the World Trade Center and Pentagon, all U.S. troops will be gone from Afghanistan.

Secretary of State Antony Blinken assured our NATO allies in Brussels that we are all leaving with our mission accomplished:

Together we went into Afghanistan to deal with those who attacked us and to make sure that Afghanistan would not again become a haven for terrorists who might attack any of us.

"We have achieved the goals we set out to achieve," the secretary said. "Now it's time to bring our forces home."

But while the U.S. military did not lose a major battle, we Americans did not win this war. Our enemies are stronger, and they control more territory today than they have since their overthrow in 2001.

They have reconstituted themselves under fire, control half of the country, and can cut roads to the capital of Kabul. And in our mission to build a democratic Afghanistan that could sustain itself long after we depart, we failed.

And we have no guarantee al-Qaeda will not reestablish itself in Afghanistan. For the most probable successors to the regime we are leaving behind are the same Taliban we drove from power in 2001.

And while the Taliban did not defeat us, they have bled the Afghan army we helped to create and train, and outlasted the United States and a NATO alliance that emerged victorious from a 40-year cold war with the Soviet Empire.

As we depart Afghanistan before summer's end, the 7,500 NATO troops there will be leaving with us. That this is viewed as no strategic victory may be seen from the reaction of those who most consistently supported the war, conservative Republican senators.

Precipitously withdrawing U.S. forces from Afghanistan is a grave mistake....Foreign terrorists will not leave the United States alone simply because our politicians have grown tired of taking the fight to them.

It is insane to withdraw at this time given the conditions that exist on the ground in Afghanistan....A full withdrawal from Afghanistan is dumber than dirt and devilishly dangerous...President Biden will have, in essence, canceled an insurance policy against another 9/11.

No one wants a forever war, but...any withdrawal must be conditions-based. Arbitrary deadlines would likely put our troops in danger, jeopardize all the progress we've made...lead to civil war in Afghanistan — and create a breeding ground for international terrorists.

But if we failed in Afghanistan, why did we fail?

Our enemies, the Taliban, motivated by a religious faith many would call fanaticism, were more willing to sacrifice, suffer, fight, bleed, and die for longer than we or our Afghan allies.

Also, it is their country, after all, not ours. It is everything to them, not so much to us. They are steeped in the traditional Afghan hostility to foreigners and hatred of those who come to their land to tell them how they should live and rule themselves.

The Taliban captured the flags of anti-colonialism, nationalism, and Islamic fundamentalism.

There is talk that, should the Taliban topple the government, bring down the regime, and engage in reprisals and atrocities, American troops might surge back in.

My sense is no. When we go this time, we're gone for good. Like the Brits in the 19th century and Russians in the 20th, when we go, we will not return.

Yet Afghanistan is only one of the "forever wars" into which our interventionists plunged us that have proven so ruinous to the republic.

The greatest blunder came in 2003, when George W. Bush was persuaded by the neoconservatives to invade Iraq and covert that country into America's model democracy for the Middle East.

Our 18-year struggle in Iraq following the invasion of 2003 has proven even most costly in lives and treasure than the war in Afghanistan.

For a generation now, we have been stomping barefoot on anthills and throwing rocks into bees' nests across the Middle and Near East.

And to what avail?

The nation-builders, the democratists, the liberal interventionists, the New World Order crowd are, today, being repudiated by Biden's decision to write off their 20-year project in the Hindu Kush.

One wonders: Will they soon start calling Biden an isolationist?