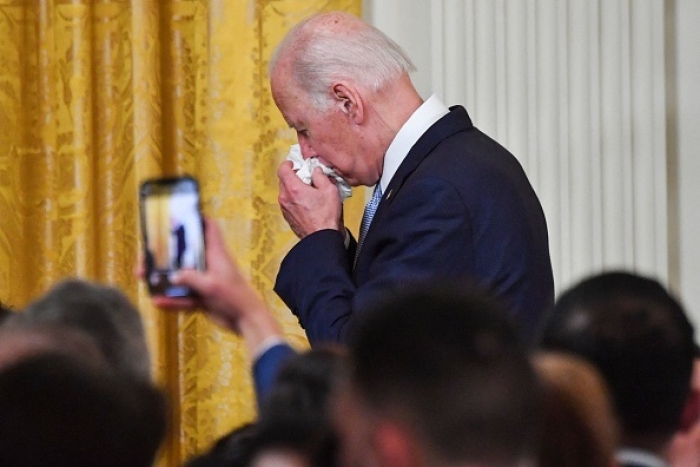 President Joe Biden during an Eid al-Fitr reception at the White House on May 2, 2022. (Photo by NICHOLAS KAMM/AFP via Getty Images)

"Sometimes nothing is a real cool hand."

In the movie classic "Cool Hand Luke," the convict Luke, played by Paul Newman, explains that to his fellow inmates after winning the pot in a hand of poker without even a pair of deuces.

President Joe Biden should take notice. For, right now, "nothing" is the hand he is looking at going into the 2022 election.

With the economy the predominant issue, the last business day of April brought disquieting news for Democrats.

"Trajectory in Question as Markets Tank Again," said page one of The Washington Post. To what was the Post referring?

Nasdaq had closed down over 4%. The Dow Jones Industrial Average was down over 900 points on the day. The S&P 500 was off 3.6% Friday, raising April's loss to nearly 9% of its value. Not since World War II has the S&P begun a year with a worse performance.

This bloodbath in the markets is piled atop an 8.5% inflation rate and a shrinkage of 1.4% in the GDP over the first quarter. If a similar decline follows in the second quarter, the economy on which Biden's party stands or falls in November will officially be in recession.

With Biden's disapproval rating already running 10 points higher than his 42% approval, the economic issue could bring an even larger rout of House Democrats than would be normal at the midterms.

The issue now ranked second as a national concern is the crisis on the border where 2 million illegal migrants crossed over in Biden's first year and the "got-aways" who evaded every U.S. official while sneaking in are estimated in the hundreds of thousands.

Some 8,000 migrants now cross the U.S. border every day. And according to the Biden administration itself, half again that many will be crossing daily if Title 42, which enables border authorities to turn back migrants into Mexico for health concerns, is lifted this month.

Third in voters' concern is the explosion in violent crime, especially "mass killings" that involve four victims dead or wounded, not including the perpetrator. This year, mass killings are nearly matching the record number set in Biden's first year.

There was a time when mass murder, like the St. Valentine's Day Massacre in Chicago by the Al Capone gang, or Charlie Starkweather's murderous rampage across the Great Plains in 1958, were rare events.

Now people shooting up malls, trains and subways, and running down people with cars and trucks are daily occurrences.

Biden is not responsible for the explosion of carjackings and mass killings or cop shootings. But his party has come to be identified with its left wing's campaign to "defund the police" and refocus on the "root causes" of crime, the social conditions said to produce criminals, rather than the criminals themselves.

The Republican Party has come to be identified with solutions that involve more police, more prosecutors and more prison cells and inmates, which, increasingly, is where the country is at.

In addition to the issues turning against the Democrats, Biden has himself become a drag on the party. His low poll numbers, verbal foot faults, visible frailty and perceived "cognitive decline" all handicap efforts to portray him as a strong, engaged and decisive leader.

The wild card in Biden's poker hand is the war in Ukraine.

Biden has funneled $3.7 billion into the Ukrainian war effort and sent Javelin and Stinger missiles and, lately, heavy artillery. He is pressing Congress for an additional $33 billion — $20 billion of that in military aid — over the next five months of this fiscal year.

Thus far, the U.S. political class in this capital has been largely united and supportive of the Ukrainians.

But dissent is rising. Why, it is being asked, are we so focused on the Eastern borders of Ukraine when the Southern border of the United States is being breached illegally by 200,000 invaders every month, and thousands more "got-aways" — some of whom are sex traffickers, drug dealers, terrorists and members of Mexican cartels.

The future of the United States is not likely to be altered in a significant way by who eventually controls Mariupol or the Sea of Azov.

But more than 2 million migrants every year walking into the United States at will cannot but have an impact on the future character and composition of the nation that has lost control of its border.

Is whether Moscow controls Luhansk and Donetsk, which it did for the duration of the Cold War and for decades before, more important to us than whether the America we grew up in becomes more of a Third World than a Western nation?