Are All Court-Created Rights Now in Peril? 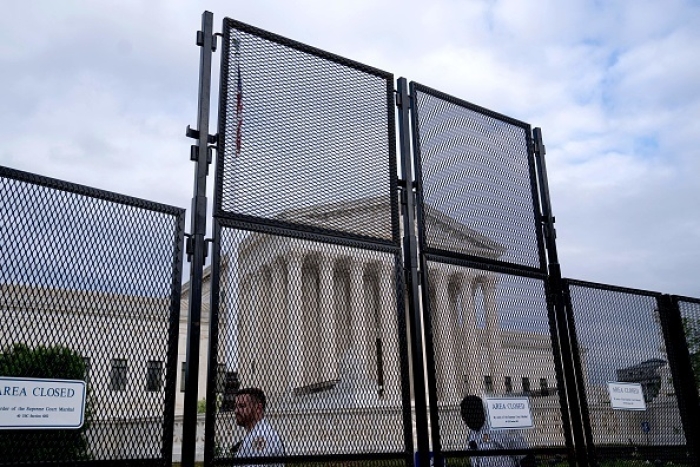 Heightened security at the U.S. Supreme Court as demonstrators gather there following the leak of a draft opinion on abortion. (Photo by STEFANI REYNOLDS/AFP via Getty Images)

In the storm that erupted over the leaked draft opinion of Justice Samuel Alito, which would overturn Roe v. Wade, a secondary alarm has arisen among our elites.

If Roe is overturned, it is said, a whole raft of Supreme Court rulings rooted in the same principles and legal reasoning could be overturned as well.

Pillars of our progressive society could come crashing down.

In an op-ed in The Washington Post, legal scholars Melissa Murray and Leah Litman wrote that Alito's draft opinion "declares that the Constitution 'makes no reference to abortion' and argues that abortion rights were 'entirely unknown in American law,' throughout most of the nation's history."

If a woman's right to an abortion no longer exists, we are being forewarned, the right to birth control, gay rights, interracial marriage and same-sex marriage could be the next to fall to the Alito ax.

Yet, the idea that a state legislature, in this decade, would enact a new statute that outlaws sexual relations between gays and lesbians or rejects any constitutional right to same-sex marriage — and the Supreme Court would uphold that statute — seems an absurdity.

Still, the raising of such fears tells us something about those advancing this line of argument. They are worried about the fate of cherished reforms that they have managed to impose upon the nation and its people through autocratic decisions of the Supreme Court.

What the pro-abortionists are saying is that many court decisions declaring new rights are not at all deeply rooted in the Constitution or in the hearts and minds of the population.

They are saying that there are more Americans than you might imagine who would like to see the work of the Supreme Court, of which progressives are most proud, undone.

They are saying that the rights discovered and declared in the gay rights and same-sex marriage decisions, for example, had to be imposed by the court. Else, they might never have become federal law. The nation as a whole would never have embraced them.

Again, what does this fear that if the Alito decision overturning Roe becomes law, all these other decisions are in peril as well, tell us?

It suggests that the national establishment lacks faith that the American people have truly and fully embraced the social reforms that progressives have gotten the Supreme Court to impose by fiat.

Earl Warren was appointed chief justice by President Dwight Eisenhower in 1953. A year later, Warren delivered his unanimous ruling in Brown v. Board of Education, which outlawed racial segregation in all public schools — 10 years before Congress was able to pass the Civil Rights Act.

They were imposed by unelected justices, serving for life, against whose rulings U.S. citizens had no recourse. And Brown and its progeny were resisted in a way the Civil Rights Act of 1964 was not.

During these same decades, Supreme Court decisions were handed down outlawing all Bible instruction and voluntary prayer in public schools and forbidding virtually all religious expressions in the public square.

The nation was formally, officially and involuntarily secularized.

A democratically elected Congress would never have enacted these proscriptions. It took an autocratic court to impose them, by exploring and then discovering in the Constitution exactly what the court had decided to impose upon the American people, without the people's consent.

Abortion was declared a constitutional right and legalized in every state, including that half of the nation that regarded it as shameful, sinful or criminal, in that it snuffed out the life of an unborn child.

Whatever else these court decisions do, they show a lack of confidence in the ruling class in its ability to persuade the majority to agree and enact a law, and a reliance upon the court to impose autocratically what progressives could not persuade the country to enact democratically.

President Joe Biden says this generation of Americans is in a global struggle between democracy and authoritarianism.

But were the decisions to outlaw the Bible and school prayer in the public schools, to declare that a right to abortion, homosexuality and same-sex marriage can be found in the penumbras of the Constitution, arrived at democratically or autocratically?

Perhaps the solution is to have court decisions discovering new rights subjected to national referenda, so the whole nation can say "Yea" or "Nay" after they are handed down.