Is America Becoming a Failed State? 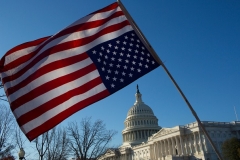 The U.S. embassy was urging all Americans to "leave Afghanistan as soon as possible." Message: Get out while you can.

The huge investment in blood and treasure by the United States over two decades to remake Afghanistan appears about to be wiped out, whole and entire, and we appear about to sustain our worst diplomatic and political defeat since the fall of Saigon.

Not once in this century has the U.S. decisively won one of the wars it launched — in Afghanistan, Iraq, Syria, Yemen or Libya. And the sole superpower status we enjoyed as the 21st century began is gone with the wind.

Yet America's hawks are urging us to give a new war guarantee to Taiwan, should Beijing exercise its claim, though former President Richard Nixon and former Secretary of State Henry Kissinger assented in 1972 that Taiwan is "a part of China."

Before we issue any war guarantee to Taipei, we might consider the Pentagon's evaluation of the results of a recent war game in which the U.S. confronted China over Taiwan.

How did it go? Says vice chairman of the Joint Chiefs of Staff Gen. John Hyten, "Without overstating the issue, it failed miserably.

"An aggressive red team that had been studying the United States for the last 20 years just ran rings around us. ... They knew exactly what we were going to do before we did it, and they took advantage of it."

Are we Americans prepared, in any way, for an air-sea-and-missile war in Southeast Asia and the Western Pacific over islands they claim as their historic national territory but we have never claimed as ours?

Here at home, the COVID-19 pandemic, now in a fourth wave, is infecting 100,000 Americans every day, with hospitalizations rising commensurately. For that third of a nation still unvaccinated, the delta variant is a potential death sentence.

Despite this medical crisis that is common to us all, our political divide is manifesting itself in savage battles over vaccinations, masks and mandates.

And while COVID-19 continues to infect, hospitalize and kill, scores of thousands of Americans are being annually lost to drug overdoses and opioids. According to the Centers for Disease Control and Prevention, 93,000 overdose deaths occurred across the country in 2020, and 3 in 4 fatal overdoses can be attributed to opioids.

More Americans are dying yearly from overdoses and opioids than all the Americans dead during the war in Vietnam.

The U.S. trade deficit numbers just came in for June, where the deficit in goods alone increased to $91 billion for the month. This translates into $1 trillion a year.

The largest component of that trade deficit is with China — an extraordinary level of U.S. dependency on a foreign nation for the vital necessities of its national life, let alone on an adversary like China.

On our southern border, an invasion of our country is taking place.

Every month President Joe Biden has been in office, illegal border crossings have increased. In June, Border Patrol recorded 178,000 border arrests — a 571% jump from June 2020. Border arrests have already reached their highest since 2000 and are on track to reach 1.8 million this year.

Biden is failing in his first constitutional duty — to defend the United States from foreign invasion. We Americans no longer decide who comes into our national home and whom we shall adopt as new citizens. Others decide, others determine our future, for us.

We defend the borders of scores of nations; we cannot, or Biden will not, defend our own. And, as former President Ronald Reagan reminded us, a country that can't or won't defend its borders isn't really a country anymore.

In our great cities, public shootings and killings have begun to exceed those of previous years. Police, under attack and abuse from the elites and people they protect, are resigning and retiring in record numbers.

America is unable to win the wars she chooses to fight. She cannot or will not control and defend her borders from a mass migrant invasion. She cannot halt an outbreak of criminality and killing in her great cities. She has not run a trade surplus in four decades. Her dependency upon foreign producers is unprecedented. And her budget deficits continue to break records every year — as does her soaring national debt.

Is that not the description of a failed or failing state?

Asked by a despondent young friend if the defeat at Saratoga and potential loss of the American colonies meant the ruin of Britain, Adam Smith assured him, "There is a great deal of ruin in a nation."

Britain would go on from the loss of her 13 colonies to create the greatest empire since Rome.

Yet if there is "a great deal of ruin in a nation," we Americans certainly appear to be testing those limits.