The Alito 5 Must Stay the Course 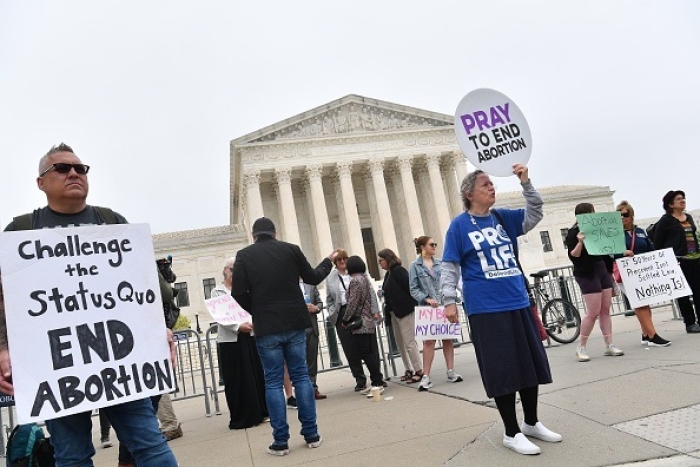 Demonstrators gather outside the US Supreme Court on May 4, 2022. (Photo by NICHOLAS KAMM/AFP via Getty Images)

In February, five Supreme Court Justices voted in camera to overturn Roe v. Wade and send the issue of abortion back to the states, where it resided until 1973.

Justices Clarence Thomas, Neil Gorsuch, Brett Kavanaugh and Amy Coney Barrett had all signed on to the majority opinion overturning Roe that had been drafted by Justice Samuel Alito.

The right-to-life movement was only weeks away from a stunning victory in its half-century struggle to overturn Roe.

This suggests that the leak to Politico of the Alito draft was the work of a saboteur seeking to derail the course of the court by the media explosion he or she knew it would ignite.

Whoever leaked Alito's draft, it was a violation of an oath, an unethical act and a betrayal that ought to see the perpetrator fired in disgrace and disbarred permanently from the practice of law.

But the crucial issue now is for the Alito Five, even if unwedded to the exact language of the Alito opinion, to stay the course until the ruling comes down in late June.

For, on the substance of the abortion issue, Alito's opinion is dead on:

"Roe was egregiously wrong from the start. Its reasoning was exceptionally weak, and the decision has had damaging consequences. And far from bringing about a national settlement of the abortion issue, Roe ... enflamed debate and deepened division. It is time to heed the Constitution and return the issue of abortion to the people's elected representatives."

"We hold that Roe ... must be overruled. The Constitution makes no reference to abortion, and no such right is implicitly protected by any constitutional provision."

Indeed, at the time of Roe, January 1973, the U.S. had a long history of punishing "abortionists," and the laws under which they were prosecuted were "spurred by a sincere belief that abortion kills a human being."

The nation remains divided, and the issue is best decided in this democracy, Alito argues, not by unelected justices on the Supreme Court but by democratically elected representatives of the American people.

As President Joe Biden just described it bluntly this week, it is the right to choose to "abort a child."

But at what point in a pregnancy does the pre-born child's right to life supersede a woman's right to abort that child. And who decides?

A New York Times front-page map this week shows that if Roe is overturned, states with liberalized abortion laws such as Illinois, California, Oregon, Washington, New York and most of New England would not be significantly affected.

It is the Republican states, the Trump states, the Mountain West and the South, where the overturning of Roe will free up Christians and social conservatives to write the regulations and restrictions that were abolished and outlawed by the Supreme Court's decision in Roe.

These states are where the post-Roe abortion wars will be fought.

But is this not how a democratic republic is supposed to work?

Remarkable, is it not? Those who do not cease to talk about right-wing threats to "our democracy" are today the loudest and most insistent that abortion not be sent back to the states for the people and their democratically chosen representatives to decide.

While Democrats see their base energized today, we are six months away from the election. And if the Alito draft becomes law, pro-choice Democrats will have to sustain their outrage and fight political battles in virtually all the red states.

Pro-life Republicans and conservatives should stand with the Alito Five and what they have done and what, hopefully, they are about to do.

For this is what a vast slice of the party and the conservative movement has fought for, worked for, marched for and prayed for, for half a century.

If Roe is overturned, it is never coming back. It is gone for good. No Supreme Court will ever reinstate it. It will be on the ash heap of history, as President Ronald Reagan used to say.

If Biden, Nancy Pelosi's House and Chuck Schumer's Senate majority want to make abortion the issue of 2022 by passing a federal law codifying Roe v. Wade, if they want to die on that hill, it's their call.

Democrats claim 60% of the nation wants Roe preserved and only 1 in 5 Americans wants Roe overturned.

Why, then, do they not pass that law codifying Roe at the national level and rely upon Roe's supporters to produce pro-choice laws in the states where they do not today exist?

If the Alito draft opinion survives and Roe is overturned, pro-lifers will have many people to thank.

Foremost among these are President Donald Trump, who elevated to the Supreme Court three of the five justices who voted with Alito, and Sen. Mitch McConnell, who saw to it that these three alone would make it.