State and Federal Laws Move to Erase Biology and Women 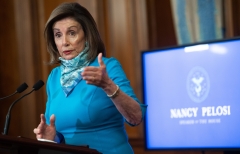 As the new year begins, elected officials at both the state and federal level are already busy manipulating language in order to erase biology in public discourse and policy.

At the tail end of 2020, California Insurance Commissioner Ricardo Lara directed the Department of Insurance “to issue a General Counsel Opinion Letter clarifying that under existing California law, health insurance companies may not deny coverage for male chest reconstruction surgery for female-to-male patients undergoing gender-affirming care for gender dysphoria based solely on a patient’s age.”

What prompted this clarification was an inquiry from San Diego’s Trans Family Support Services, which claimed some insurance companies had been denying coverage for “male chest surgery for patients under 18 years old who are transitioning from female to male.”

The state’s response is particularly instructive in demonstrating how California twists language to force the public, including insurance companies, to bend to the demands of the LGBTQ movement, erasing biology and women as they go.

The letter asks if a health insurer may “deny coverage for male chest reconstruction surgery (mastectomy and creation of a male chest) for female-to-male patients….” Previously, language for a double mastectomy in the case of a transgender person would have admittedly simply been a cosmetic procedure, not a “reconstructive” procedure in the medical sense.

If a transgender patient is requesting this surgery, the person does not have cancer or another illness precipitating the need for reconstruction. A gender dysphoric person desires a double mastectomy purely for aesthetic, or cosmetic, reasons.

The most appalling part appears later in the letter where Lara, on behalf of California, states, “reconstructive surgery is defined as ‘surgery performed to correct or repair abnormal structures of the body caused by congenital defects, developmental abnormalities, trauma, infection, tumors, or disease…’”

Notice another subtle change in language: Breasts are now “abnormal structures of the body caused by congenital defects.” That a public official would make such an egregious, misleading statement about basic biology and steer insurance companies to do the same in order to provide coverage is one of the most outlandish things California has done to promote LGBTQ groupthink.

It’s surprising that California, home to many women who were at the forefront of the women’s rights movement, would be zealously committed to erasing biology that makes women women, and call cosmetic, voluntary mastectomies an avenue to “repair abnormal structures.”

This is an affront to women and especially mothers, whose breasts are not at all “abnormal structures” but oftentimes aid in keeping their own newborns supplied with milk for nutrition and growth.

It’s not just California that is manipulating language to help erase biology and womanhood. Elected officials are trying to do the same thing at the federal level, as well.

On Jan. 1, Speaker of the House Nancy Pelosi, D-Calif., and Rules Committee Chairman James P. McGovern, D-Mass., unveiled the rules for the 117th Congress. The press release claimed the package would include “sweeping ethics reforms” to make the new House of Representatives “the most inclusive in history.”

Among the many changes brought on by the new rules, the package:

Changes pronouns and familial relationships in the House rules to be gender neutral or removes references to gender, as appropriate, to ensure we are inclusive of all Members, Delegates, Resident Commissioners and their families—including those who are nonbinary.

The new House rules will also “address issues of inequities on the basis of race, color, ethnicity, religion, sex, sexual orientation, gender identity, disability, age, or national origin; honor all gender identities by changing pronouns and familial relationships in the House rules to be gender neutral.”

Federal law already bans discrimination on the basis of sexual orientation, gender identity, and a myriad of other terms: There is no need to go a step further and de facto ban specific terms that reference biological sex or gender.

That progressives in the new House of Representatives would take the time to ensure the slow but steady erasure of biology and women via terms at the federal level seems like evidence that this issue is of great import to progressives, and conservatives ignore it at their peril.